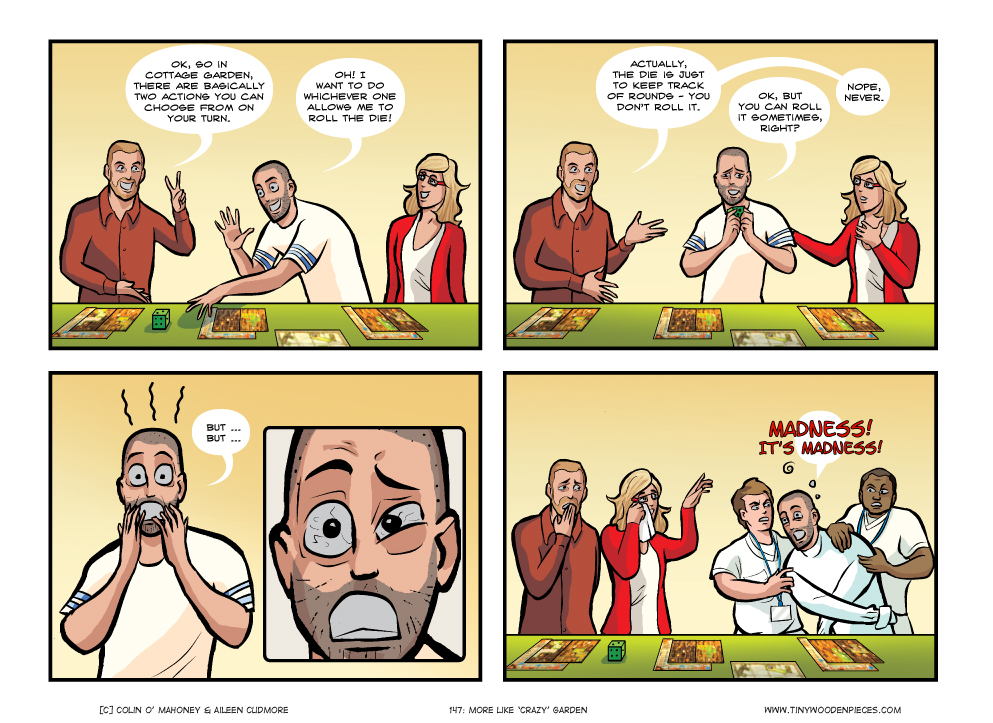 The description of Cottage Garden in the above comic is accurate. I have not yet played Cottage Garden. Make of this what you will.

In all seriousness, though, we enjoy Patchwork, so there is no reason we shouldn’t enjoy Cottage Garden. Well, there is one reason, but excepting the mistreatment of dice, I think we would get along fine with the game.

It takes the basic structure of Patchwork, adds some new mechanics, and ups the player count to four. There is also a change of theme, but in both games, the theme is so light as to be relatively unimportant.

In fact, it was the theme of Patchwork that initially kept me from playing it for so long. I would mentally switch off at the mention of it, so uninteresting was the theme to me. So despite the praise it garnered, I never as much as watched a review or playthrough. Eventually, seeing it crop up on so many lists of recommended two player games piqued my interest. Once I had gotten over the theme, the core mechanic (Tetris, after a fashion) is actually really cool, and something I hadn’t come across in a game before – although I gather Uwe Rosenberg has also incorporated this into ‘A Feast for Odin’ as well as ‘Cottage Garden’.

International Tabletop Day is tomorrow! What’s everyone doing? I’m going to be helping out in Tabletop Cork, teaching people games and running a game of Fiasco. Fiasco doesn’t technically need a GM, but the event is designed for RPG beginners, so I will be facilitating.

Whatever you are doing (and I hope you are doing something), you should check out these awesome printable badges/stickers that the amazing folks over at Semi Coop have designed. There is a full range of achievements/accusations to pin on your friends throughout the day, and the design is just gorgeous. The guys at Tabletop Cork have a full range printed and ready to go, including this, ahem, particularly awesome ‘mentioned a board game webcomic’ badge. Wear it with pride!