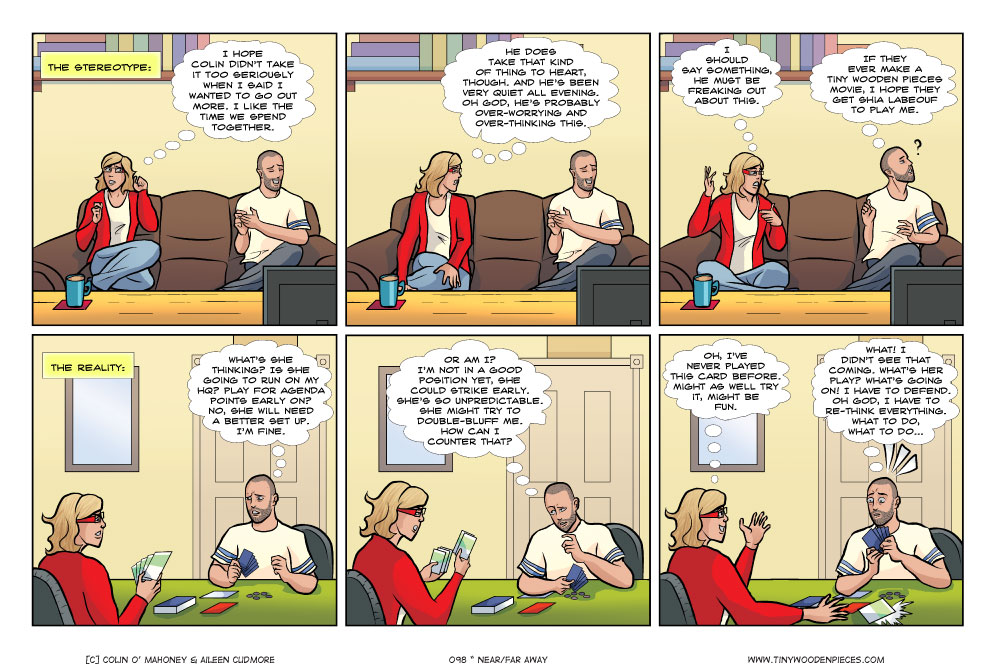 I do tend to overthink things in both life, and games. While it sometimes serves me well in games, it rarely does in life. As for thinking too much about Shia LaBeouf, I make no apologies.

This comic comes from a long conversation I had with a good friend about gender differences. The crux of the conversation was that, after so many years of dealing with men, they can still surprise and frustrate by, well, by acting like men. I could but apologise for my gender, while at the same time wonder if I could use the conversation for a comic. Which probably warrants another apology.

My first instinct on the comic was no. A ‘men are from Carcassonne, women are from Catan’ scenario immediately feels lazy, clichéd, and at worst, inappropriate. But I spent a lot of time thinking about it, and whether I could justify using it.

Ultimately, what made my mind up was Community. At least 6 years late to the party, we have only just started watching it. I think so many people had so many good things to say about it for so long, that we felt it was being shoved down our throats, so resisted it. Joke’s on us, I guess, as it deserves every line of praise it has ever gotten.

What it does really well is a running line of commentary that deconstructs and makes fun of sitcom tropes and clichés. At the same time, it will use a lot of typical sitcom structures, characters and devices in its episodes, and do great things with them. It won’t even try to be ironic or subversive in its use of these devices, but elsewhere, will do a perfectly good job of skewering them. Does subverting a cliché make it ok to use a cliché? If done well, then yes, I think so.

Here, the first three panels are just the lead in, merely the bait in a bait and switch gag. They are not meant to suggest that the stereotype is true, or even true in the instance of myself and Aileen. Hence being clearly labelled as ‘stereotype’. They are merely there to show the reader one thing, before pulling back the curtain and revealing another. Ultimately, like so many of our comics, the joke is on me, not Aileen. Making fun of other people has never really felt as comfortable as making fun of myself. I know myself well enough to do it well, and I know I can take the joke.

The big question though, is who ‘they’ are, and why ‘they’ would ever want to make a Tiny Wooden Pieces movie.