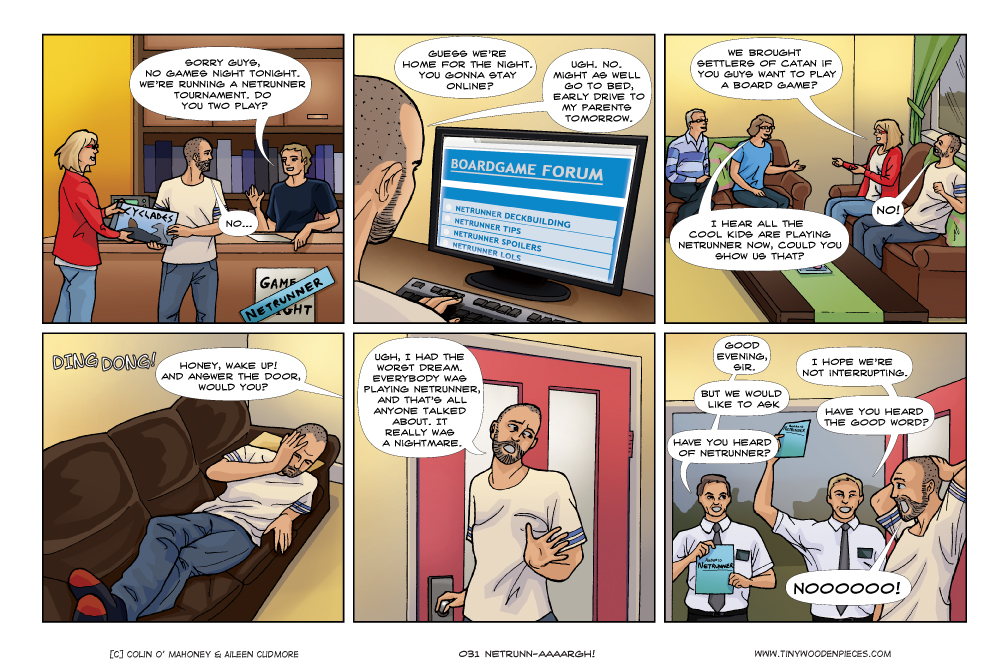 If you’re interested, you can find it here, and you can bid on a guest appearance in a Tiny Wooden Pieces comic here. If you are the highest bidder when the auction ends, we will also ship you signed, colour print of the comic in which you appear. If you are one of the many who have already bid so generously on this item, I would like to thank you.

After which brief detour we return to the uncrowned king of the Living Card Game, the titan that is Android: Netrunner. I’m sure all of you who don’t play it will have been nodding along to this week’s comic, smiling knowingly at the all-too familiar situations and conversations. And maybe even the recurring nightmares, though that might just be me.

Of course, those of you that DO play Netrunner will be sitting back in your swivel chairs, cutting a deck in one hand, stroking your white cat with the other, knowing that resistance is futile and eventually we will all be worn down by the reviews, ratings, ravings, podcasts, websites, blogs and shelf-space afforded to Netrunner. That our finely-tuned aversion to collectible games can be short-circuited, our love of boards above decks can be bypassed, and our suspicion of anything so universally praised can be disappeared in the darkest corner of a remote server farm, never to be heard from again.

In fact, just this week Tiny Wooden Towers, home to both of us and our studio (of the haphazard, home grown variety) had been breached. We finally broke down and under the entirely hypocritical pretence of necessary research for this week’s comic, purchased a copy of Netrunner.

More to follow as this story develops, and we actually get a chance to play it.