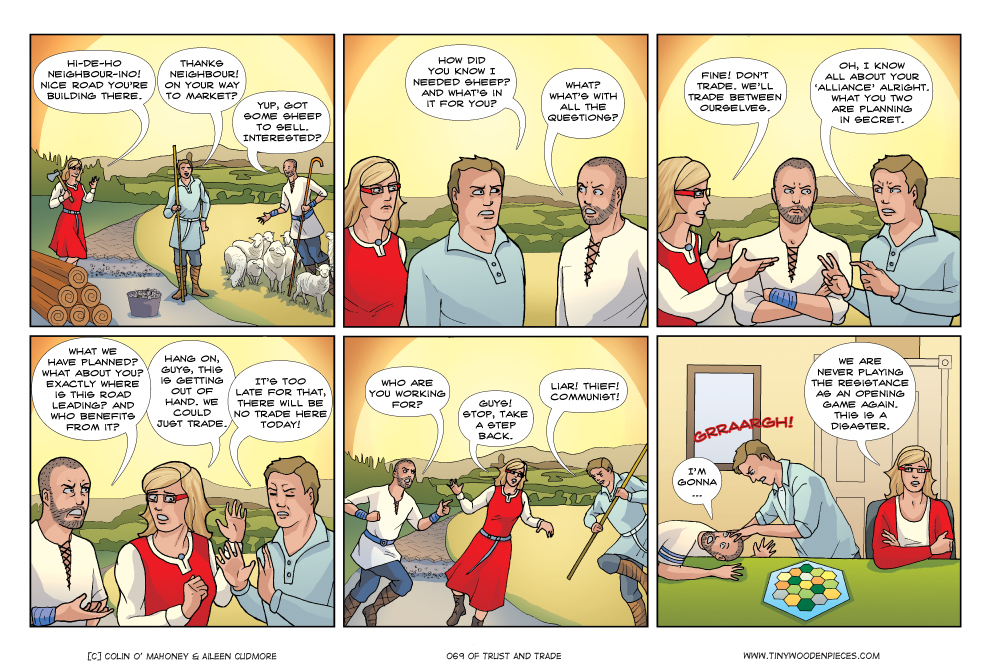 Of trust and trade, and Gen Con

Sooner or later, we always return to Catan. It’s a kind of home for us here at Tiny Wooden Pieces. It’s not that we play the game that often. It’s more about what Catan represents, and the place it has in our collection, and in the modern history of board games. Catan deserves all of the respect it has, and it definitely deserves its place in the board gaming hall of fame. Also, we’ve grown quite fond of our settler and his hapless struggles.

Your mileage on the game itself may vary, and that is fine. For our own part, we still enjoy it when we do get to play it, and at this stage are looking to expand our settlement through some seafaring in the near future.

If you’re wondering what we thought of Gen Con, while we weren’t there, we were following the news very closely, and posted our top 3 news items from Gen Con on our Facebook feed during the week. While the number of announcements and new releases did seem to be down from last year, there was still plenty to get excited about.

One thing that did stand out for me though, was a lack of any announcements about upcoming app-integrated, or digital games. Although controversial (needlessly) there is no doubting that app-integration got off to a very successful start with X-Com, Alchemists and Golem Arcana being well-received critically, and, to the best of my knowledge, selling very well too. The board game industry is as much at the mercy of trends as any other, and so I expected there to be a ‘second-wave’ of digital-integration, with more designers folding the tool into their collection, and publishers jumping on the bandwagon.

I was excited to see where digital-integration would take the hobby next. It’s exactly the kind of mechanic that could leave to some real innovation, and I would hate to see its battery fade before it had a chance to even fully charge (sorry).

Maybe it’s just too soon, though, and it will take a little longer for the second wave to hit. Board games are not designed, playtested and produced over days and weeks, but rather months, and often longer. So if the next wave takes a little longer, fingers crossed it will lead to innovation rather than novelty, and some genuinely great new games and mechanics.

Fingers crossed that some digital surprises will be unveiled at Essen later in the year.