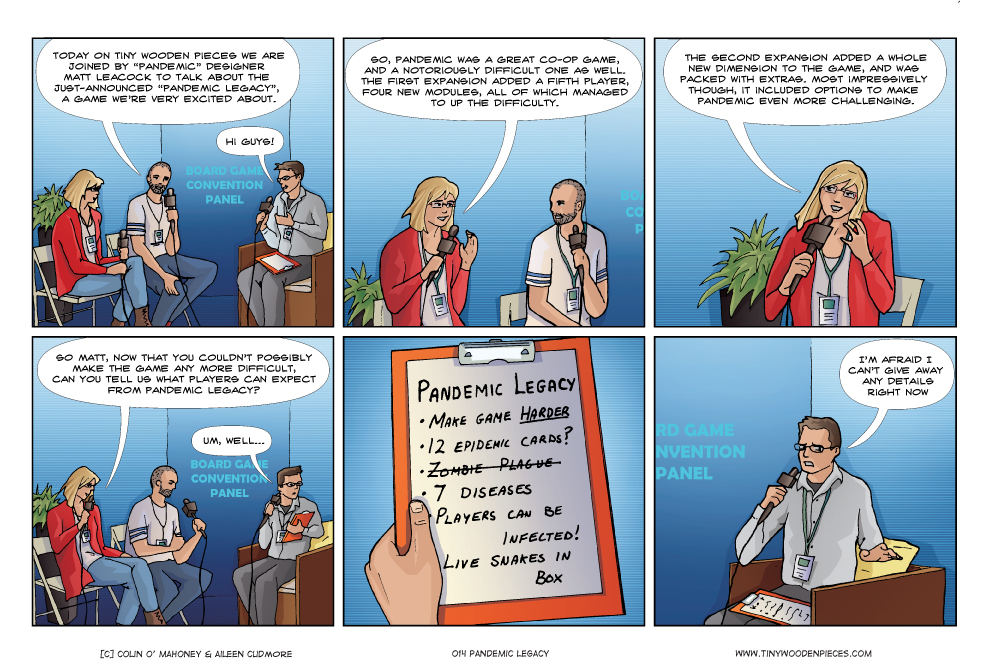 A special thanks to board gaming legend Matt Leacock for agreeing to be part of this week’s comic. As well as a great designer he’s apparently a good sport as well. On top of this he’s designing a new Thunderbirds game, something I’m hugely excited to play.

Pandemic was an important game for us. We were getting into the hobby, or at least getting more interested in it. We didn’t have any friends who played board games, and there were no local gaming groups we were aware of. I spent a good deal of time online researching what game to get, and came across Table Top. My brother had told me about Pandemic, but the theme seemed so … not fun. Scientists? Curing diseases? Why would I want to play a game about diseases. On paper it was not my cup of tea. But with the episode on Table Top I decided to at least watch it being played. So I watched the episode.

The next day I got Aileen to watch it again with me. I was amazed that watching a board game being played could be interesting, let alone tense, and exciting. This was dramatic, suspenseful, stuff. And that was just watching it being played. There were a few different games that started us on the path towards the hobby, but Pandemic was what get us there, and did a lot to keep us there as well.

It is part game, part puzzle. Co-op takes the competition out of it, so you’re working together against the game. And the game is fiendish, having several ways to defeat you. The design of Pandemic always puts me in mind of a piece of clockwork. All the pieces of the game fit together so well, one element perfectly complementing another, all working in unison, everything silently ticking away, counting down to the players’ doom. The threats grow gradually, allowing the players the opportunity for damage control. They can quickly spiral out of control, but only if left to fester unchecked. Add to this a ticking clock element, and mechanics that mean players have to work as a team in order to win, and I was hooked. It is one of the tightest designs I have ever played. It was also the first game I came across with a variable difficulty setting, allowing us to introduce new players to the game, and continue to play it ourselves on a harder setting.

A victory never fails to feel hard fought, and a loss always feels like you could have won if only you made some different decisions. I have lost games of Pandemic by a single action, and won countless games on the last, or second last turn. We don’t often buy expansions, but for what they add to the game, and for how much we like and play the game, the Pandemic expansions managed to break that rule. Well, one so far, and no doubt the second before too long.

Saving humanity one disease at a time

Ah, I love Pandemic. It was probably the first proper co-operative game I’ve played, and I enjoyed it so much that I now have a soft spot for all co-op games. And the epidemiology theme is fascinating. (I also like games with maps, so that’s another plus for me.)

And so yes, I am super-excited about Pandemic Legacy. I love the idea that the decisions and actions taken in one game will affect all future games. A campaign game that will bring you and your friends together on an epic journey to purge the world of deadly diseases. A game where characters will evolve (as well as the diseases), with surprise twists and turns along the way, creating an unforgettable story that is unique to your group.

The game is still in development stage at the moment, so it will be a good while yet before we can get our eager paws on it. But until then, we have this tantalising tagline to keep us going:

One year. One team. One hope.