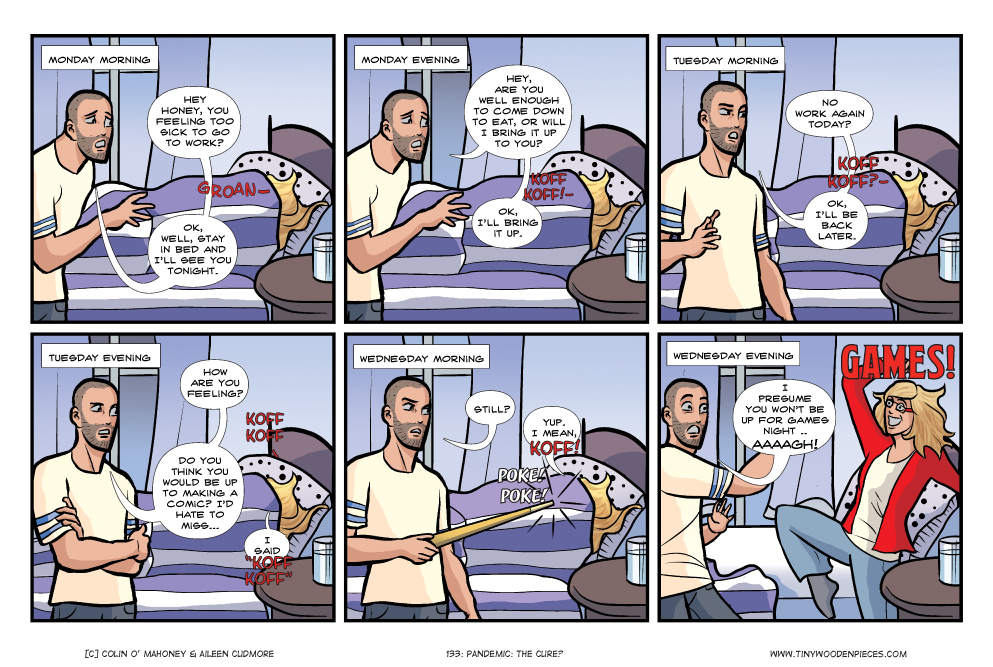 This is, more or less, a comic about how there very nearly wasn’t a comic this week. Moreover, it is a comic about why this is a comic featuring just one character in a simple setting talking to a bed, as opposed to another ‘actual’ character. In other words, it was as much as could be done once Aileen had recovered.

It is also a true story. Thankfully, Aileen is entirely better now, thanks in no small part to board games. So from here on out it’s regular, weekly updates. Also, in case anyone is concerned, the stick I wield in panel 5 is not normally used to test the level of sickness/wellness in Aileen. It is actually my editor’s stick, and is generally used to make sure comics are made on time. The manner in which the stick is used for both purposes is, however, surprisingly similar.

Started 2017 by kicking a big game off our bucket list – we finally played 7 Wonders. Not the all-new, all-fancy Duel, mind you, just regular old-fashioned 7 Wonders, which is one of those games that we had somehow managed to avoid playing up until this point.

I enjoyed it. It’s a really nice engine-building system, with a great theme and artwork to back it up. There’s interesting decisions to be made with almost every hand, and it has a surprisingly fast play time for how much ‘game’ you get out of it. The game goes through three ‘ages’, wherein you pass your hand of cards around the table, picking one card to keep at a time, laying each chosen card in front of you to further your civilisation. Sort of like Sushi Go, but with pyramids.

Cards will earn money, resources, or just take you straight to victory points. As the ages pass, the cards get more expensive, but if you’ve been doing your job right, your earlier efforts will have laid a sufficient foundation of resources to pay for these cards. As you expand, you can choose to specialise in science, commerce, civilisation, or war. It’s a mix of planning, and adapting to your hand as you are dealt it, and it’s a mix that it gets right.

After two plays, it’s a game that I do want to go back to, but I also feel its lifespan will be somewhat limited for me. On paper, it’s a game with huge replayability – there appear to be a lot of viable strategies, and what will work in any given game will depend on the cards you are dealt, and of course the cards your neighbours will choose to either take or pass along to you.

Where it falls down for me is player interaction. 7 Wonders does have it, but it feels almost like an afterthought – just a box that was ticked, rather than an element that was integral to the design. You can purchase resources that you don’t produce yourself from your direct neighbours (i.e. the players to your left and right), but it’s a set transaction they have no choice in.

At the end of each age, military strength is compared to your neighbours, and victory points are either rewarded or deducted. Interaction is present, but it just doesn’t feel very deep, even for a relatively quick card game. It is definitely a game I like, and one I want to play and explore more, it’s just not a game I’m super-excited about. Maybe it’s just a game that suffers from its own hype, and had it not been built up so much I would have enjoyed it more? Impossible to tell, but maybe it will grow on me over time.