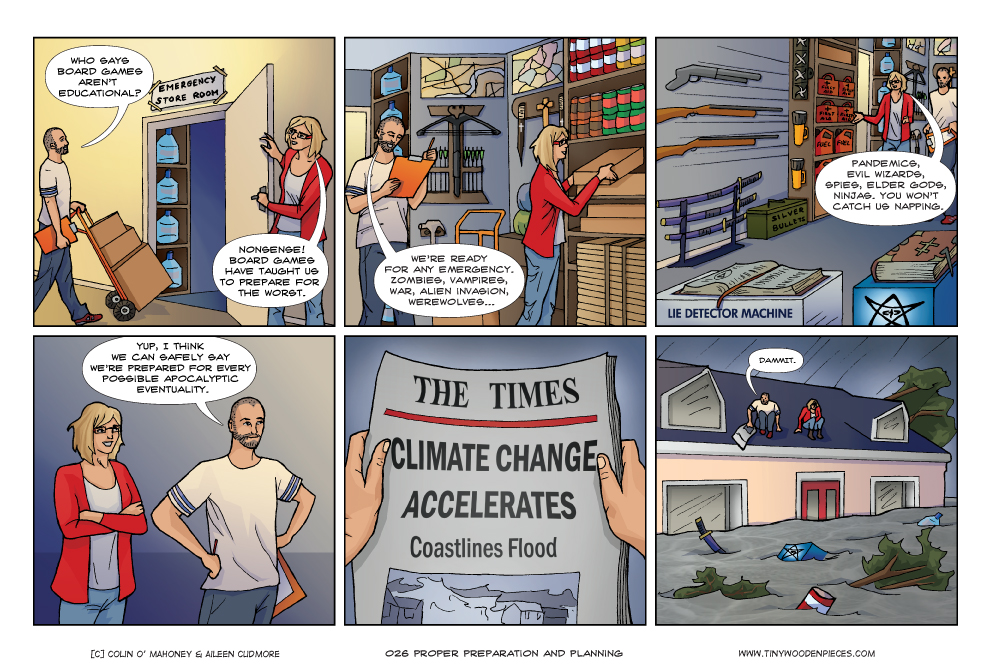 Board games sure do love the end of the world. Also wizards, but that’s not relevant right now (note to self: write comic about wizards). Interestingly, board games also love planning/building/settling/developing/designing. So why there isn’t a board game where you have to plan for catastrophe in the city/town you are mayor/planner of is beyond me. A game where you have to, say, build your city’s defences against floods, and balance this with more ‘popular’ spending decisions and other political concerns would be great. If you spend too much you won’t get re-elected because you can’t afford tax cuts, but if you don’t spend enough, the cost of damages, financially and politically will ensure you don’t get re-elected. In other news, being a politician probably sucks.

You know what else sucks? Having to link one paragraph to the next. I find that hard. Which has nothing to do with the fact that we didn’t get a lot of board gaming done this week. None, in fact, meaning Dead of Winter is still the most recent game we’ve played. This is why the apocalypse is still on our minds. That and an actual conversation about the sad realities of climate change, which, believe me, is a LOT less fun than playing Dead of Winter.

So back to board games: We’ll be playing some more Dead of Winter this week. We’re still only a couple of games in, and have yet to play any of the longer scenarios. Now that our group knows the basics we’ll be tackling some of those, and it’s something we’re really looking forward to. It’s a new games night for us, with a new-ish group, and we’re still getting into a routine. Once we have a routine established, we will be cracking into a Risk: Legacy campaign. This is something we are both incredibly excited about. I love the idea of a true campaign in a board game, maybe more than any other idea in board games. For this reason I refuse to commit until we do have a solid routine and trustworthy regulars in our group. People who I know can be counted on to turn up and play the campaign through to the finish. I figure Risk: Legacy is pretty much a one shot deal, and if it is spoiled for us, there may be blood spilt. Actually, I’ll probably just cry. Either way, the board is getting liquid damaged, and nobody wants that.