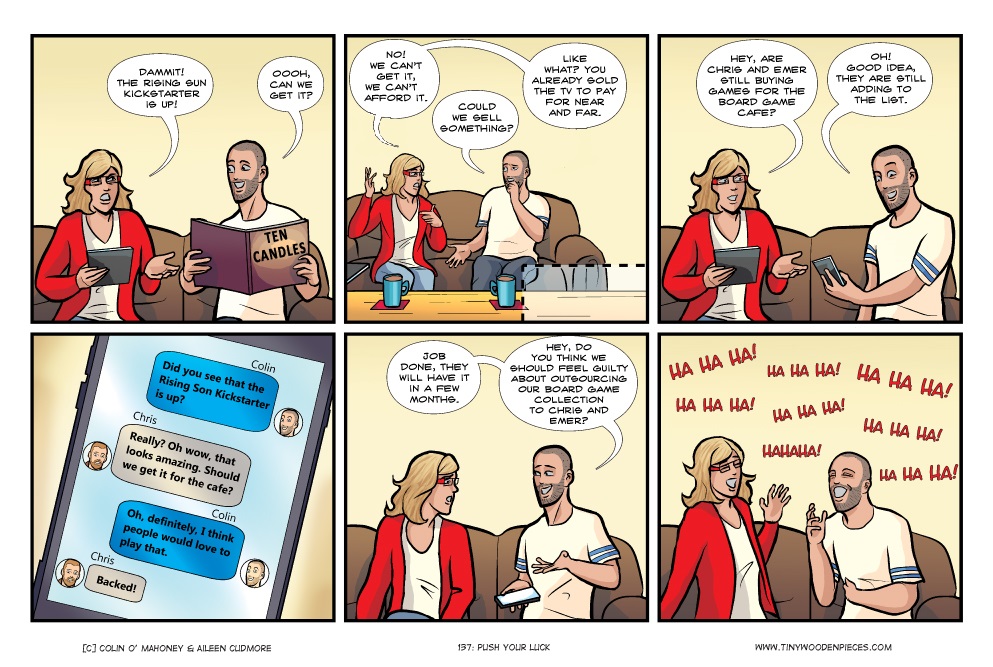 The Kickstarter was a huge success, so now Tabletop Cork is only a matter of time, and of finding the right venue. And while they are sourcing good locations, Chris and Emer also have all that Kickstarter money to spend on shiny new board games for the cafe. While we like to think of ourselves as generally being good, honest people, board games are so expensive, and we only have so much furniture, family heirlooms, and clothing we can sell to pay for them.

Chris and Emer, you are probably both reading this, so I would just like to say, we would never do that to you in real life.
But also have you guys seen the Heroes of Land, Sea and Air Kickstarter?

In all seriousness though, games becoming more expensive does seem to be a trend. As the hobby grows, and the market becomes ever more crowded and competitive, this would appear to be counter-intuitive. More competition should mean more competitive pricing, and not the reverse. So why are board games bucking the trend?

While it’s impossible to give conclusive answers when dealing with such a large market, there are some definite culprits. Firstly, I think the trend towards miniatures has had a part to play. It’s the big Kickstarter trend in board games, and has been for a while – pack the box with minis and charge accordingly.

This isn’t to say that companies who produce miniature-heavy games are ripping people off. The point here is that it has become ‘normal’ for a board game to cost 100+ Euro/Dollars/Gold Coins/Victory Points. Five years ago, I would have laughed at the idea of a board game that cost that much, but now it’s not that unusual. This trend has allowed for games like Kingdom Death Monster, and Mechs Vs Minions – boxes that cost literally hundreds.

Again, that is not to say that these are not good value games, but rather, as higher pricing becomes the norm, so other manufacturers are more likely to follow suit. To include miniatures in their box, or higher value production and components because that is where the market is trending.

Another culprit here is definitely the huge number of mergers and acquisitions that the hobby has seen in just the past three years. While there might appear to be as many competing publishers as there ever was, the reality is that these publishers are in fewer and fewer hands, and are not actually competing in the same manner that we think they are.

In the past three years, Asmodee has acquired Days of Wonder and Fantasy Flight. Last year it bought F2Z Entertainment, which owns Plaid Hat, Z-Man, and Filosophia. That is a huge number of publishers, brands, and games all under the one roof, and there is no reason for Asmodee to consider reducing its prices.

A company the size of Asmodee can exert such an influence of its market as to distort it – hence the laws against monopolies that exist. Recent reprints from Fantasy Flight Games have shown this. Citadels went from a small box, sub-20 Dollar game to a 30-dollar game in a much larger box (now published by Asmodee). Of course, you get so much more in the box now, in terms of game and components, but it’s still a worrying trend. The same thing can be seen in the shiny, lengthened, hardback new edition of ‘The Extraordinary Adventures of Baron Munchausen.

One small positive to be gleaned from this is the also-growing trend for micro games. As an answer to the ever-growing price tag and box size of popular games, some publishers and designers have seen an opportunity to stand out by doing the opposite – tiny boxes with equivalent price tags.

Love Letter is of course the flagship of this movement – containing just sixteen cards and with a price tag well under sixteen dollars/Euros, it presents phenomenal value and great gameplay. Star Realms is our most played two player game. At well under 20 of your local currency, its tiny box is packed with variety and replayability. While it might not technically be a ‘micro game’, it is a cheap game in a tiny box, and that’s good enough for me. I think a reduced size means a game has to be stripped back to its bare minimum – no frills, excesses, or unnecessary complications, and that can turn a good game into a truly great game.

On a final note this week, I want to give a mention to Our Turn Podcast: Women in Gaming, who as of this week are part of the Dice Tower Network. Co-host Sarah Reed is a friend of the comic, and an all-round great person too. The current episode focuses on ‘gaming challenges’ – such as the 10×10 (which we tried last year but failed appallingly), which Sarah was the original architect of.