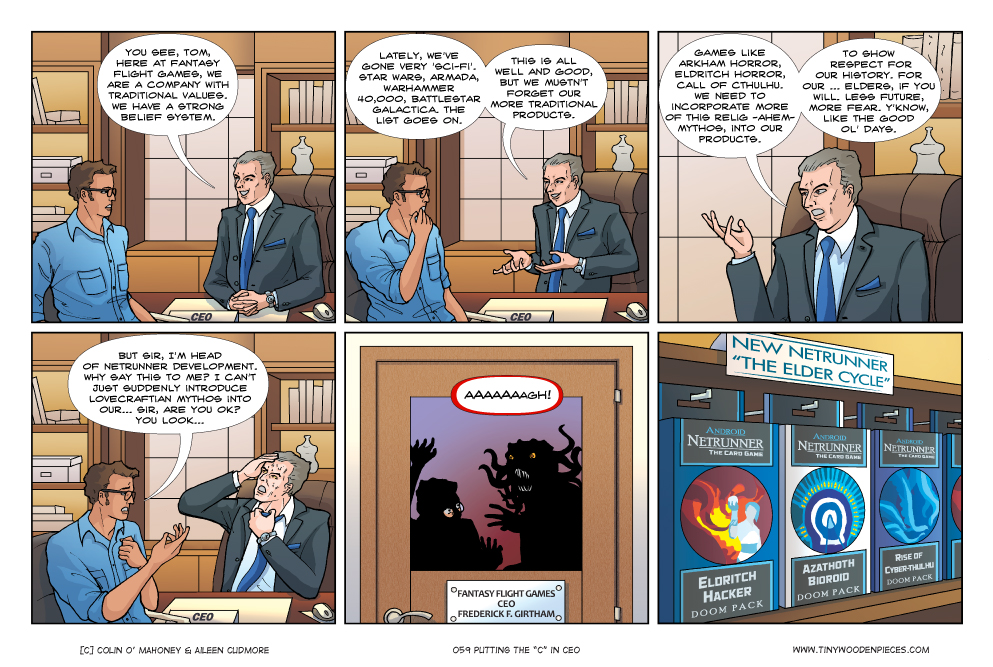 Putting the “C” in CEO

Games released by Fantasy Flight Games crop up a lot in our comics, you may have noticed. If you were wondering, this has nothing to do with anything as coarse as corporate sponsorship or paid content. Neither do we share their frankly, rather worrying over-interest in Cthulhu. Mighty as he may be, we do not see him as a being to be deified, worshipped, summoned, or even one to have a drink with of a Friday evening when no-one from work is coming out and gosh-darn-it it’s been a hard week doesn’t a man deserve just one drink, and  really he was the only one answering his phone and sure, he’s not the best conversationalist, and those tentacles can keep you out of more discerning establishments, but what’s the harm, it’s just one drink with an Elder god, right? What could go wrong?

Point being, Fantasy Flight pop up often, and that’s simply because we play their games often. Aileen and I both love sci-fi, and we have a lot of friends who love horror, which are two genres that FFG have pretty well covered. Very well covered, really, as mentioned in this week’s comic. We would love to cover a greater breadth of games, but we are limited to games we either buy or play. We will sometimes feature games we have never played, but that doesn’t always sit right with me. It feels too much like judging something without having played it, even if we are simply making a joke.

Of course, FFG aren’t the only publisher with a sci-fi or horror catalogue. We have bought very few games so far this year. We haven’t been finding too much time to play games, and we are still working our way through past purchases. When we get caught up, we are aiming to diversify, both in terms of theme and game. I mentioned last week that we are eyeing Agricola (but now torn between that and Caverna). We just watched a review of Panamax, which sounds amazing, but it’s not a game I’d be comfortable buying until we have carved out more regular time for playing. I’d like to do more than dip my toe into the shipping waters of heavier games, in fact. There are a number of titles tickling my fancy, but again, time is too important a consideration to be ignored. There simply isn’t enough time in the day to get through all the games I want to play. There aren’t even enough hours in a lifetime, really, considering the sheer wealth of titles being released all year around. If only there were some way to get more time. Some way to extend life, some being or deity I could call upon to ensure all the time and games I could ever want. Some ancient, lurking, many-tentacled god that would grant dark wishes and somehow ensure immortality.

Now who could that be…?