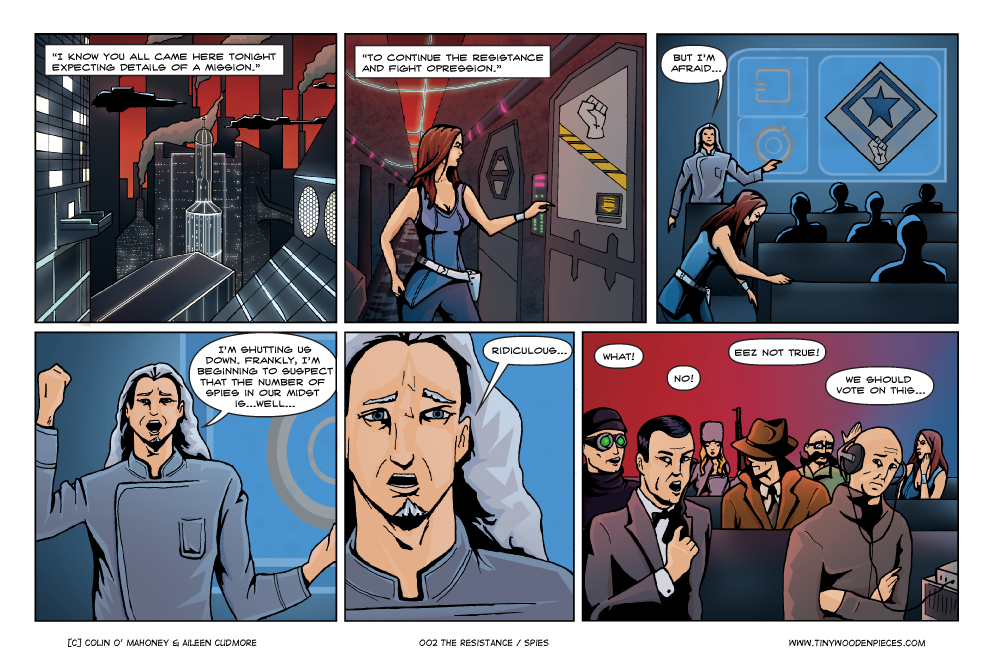 The Resistance is a good game to talk about how we here at Tiny Wooden Pieces feel about boardgames. There is very little ‘game’ to it, in a manner of speaking. You get some cards and some tokens, and a small board to keep track of them during the game. That is it. The Resistance is all about player interaction.

Some of the most fun I have ever had playing games has been with The Resistance, and I have had some evenings where I’ve brought it to the table and it’s fallen almost embarrassingly, awkwardly flat. Where players just didn’t buy into it. It’s absolutely a game you can use to introduce non-gamer friends to the joys of boardgames, or just bring down the pub (sleeves recommended, here) or bring out at a family gathering. If people are willing to give it a try, to put themselves into the game, they will get a great evening out of it. If not, and you might as well be playing Connect 4.

So it’s a good microcosm of what boardgames are about, for us: people. We play games to have fun, and to do so with our friends.

One caveat with The Resistance, though, is that numbers are important. You need more than 5. With 5 players you have 3 resistance and 2 spies. That means it’s too easy for the spies, and too difficult for the resistance. The spies can just sit back and do nothing, and then it doesn’t feel like you can do much as part of the resistance. Otherwise, it’s a quick playing bluffing game that can really get a group interacting. Mostly by piling lies on top of accusations on top of deceit sprinkled with betrayal. But if you don’t mind never trusting your friends again, this is great stuff.

So it seems like everybody’s a spy in The Resistance.

In a game that divides people in to oblivious good guys and treacherous spies, it can be horribly difficult for the resistance members to choose players to go on a mission. Although only three successful missions are needed to win, the spies have a massive advantage in that they all know who each other are… And so with enough cunning, at least one of those Imperial spies should be able to wheedle their way on to every team and thus spoil the mission.

I actually really enjoy playing as a member of the resistance, using the power of logic to weed out those nasty government spies. In fact, the only responsible thing to do is to pursue the spies at all costs, challenging all other players in the game. Any former ties and relationships are coldly discarded in the search for the truth, as accusations of sabotage are flung across the table. All this while warily watching every single player for any unusual movement or twitch that might give them away.

But god help me, I do not make a good spy. I am absolutely, stupendously useless at bluffing. And if caught in a lie, an uncontrollable flush creeps across my face and everyone immediately knows the truth. So the best tactic I’ve found so far is to always convince myself that I’m a good guy. Which sometimes works? But maybe I just need a little more practice. Repeat plays can only help to make this great game even better.