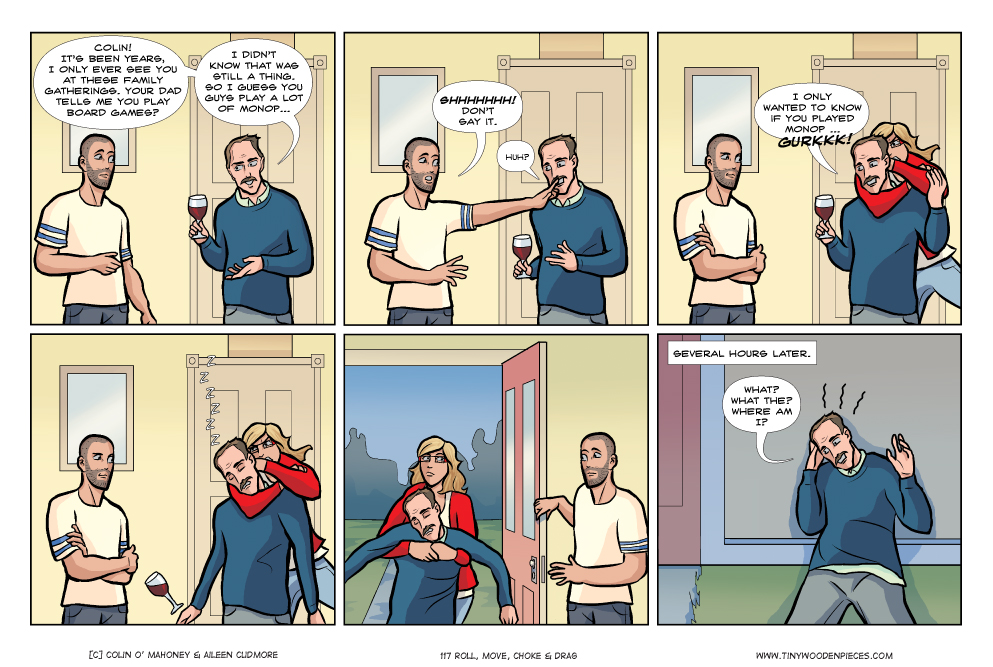 While Aileen madly scrambles to wrap up her dissertation, there hasn’t been much time for table top in our house. To pass the time, I’ve been playing Dishonored, one of those games you play on a ‘console’ as opposed to a table.

Dishonored is essentially an alt-history Metal Gear Solid set in a dystopian clockwork-punk London. Anyone familiar with the mechanics of such games will notice the influence in today’s comic, in which the unconscious form of an enemy is dragged out of sight. If you are not familiar with this type of game, well, basically you drag the unconscious body of your enemies out of sight, so the other enemies don’t notice their prone form. This allows you to sneak up on said enemies, and after a brief, but hopefully silent struggle, add their sleeping form to the growing tangle of bodies hidden just around the corner, probably behind a stack of crates. Rinse and repeat.

I’d like to note here that I think Aileen totally nailed the ‘friend of your dad’ look implied in the script, for the would-be Monopoly-mentioner.

It can be tough to describe the hobby to someone whose experience of it begins and ends with mass-market efforts like Monopoly, Risk, and Cluedo. It’s like trying to explain modern television to someone who has only ever seen Neighbours and Home and Away. There is just so much more out there now, where do you even begin? If in that situation, I will generally try to find a topic or genre that the person is interested in, and by trying to find a game that meshes well with that. With the sheer wealth of board games that now exist, there is something out there for every taste, if you can just find it.

On a final note, I’d like to emphasise that the comic isn’t ‘aimed’ at Monopoly, any game like it, or indeed, anyone who enjoys those games. If that’s your bag, more power to you. I honestly still enjoy vanilla Risk, and although I haven’t played it in years, I don’t think I would turn down a game of Monopoly, but that’s probably more curiosity than anything else. The comic is intended to evoke that frustration we have all felt when coming across an uneducated view of the hobby. That huge gap between the perception of what board games are, and what they have evolved into these past twenty years.