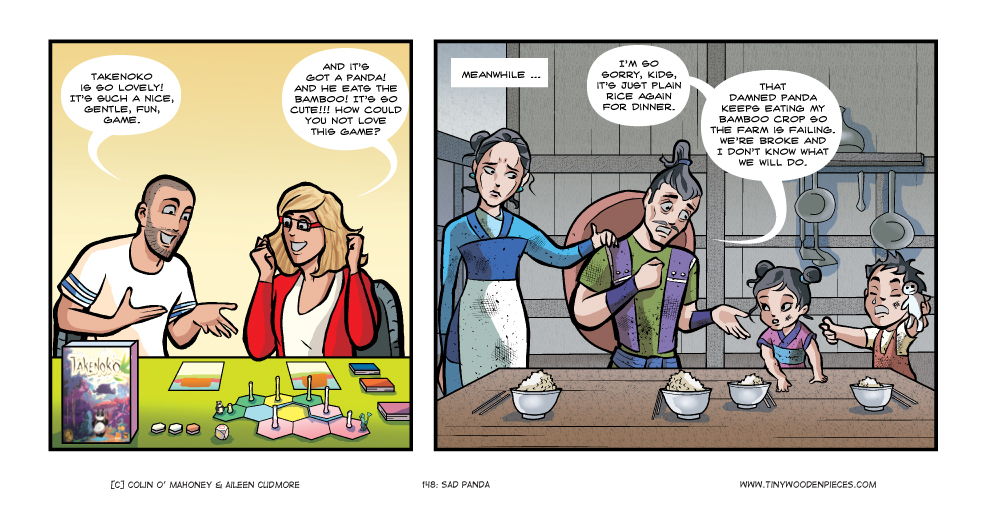 Sad Panda (and the Goonies)

Takenoko is, of course, a fantastic game. But the harsh reality is that pandas are basically the Darth Vaders of the animal kingdom.

I hadn’t heard any hype at all about publisher Albino Dragon’s ‘Goonies adventure Card Game’. A recent Kickstarter release, the game had managed to escape my attention completely until the most recent Dice Tower episode. Guest contributor Richard ‘Rahdo’ Ham gushed about the game, and in doing so used Pandemic as a comparative.

Good enough for me.

By happy coincidence, Tabletop had just added it, and I’ve just recently come upon an unexpected glut of free time. While I’m sure ‘The Goonies’ holds up as a fun film (probably), I have no great nostalgia for the title, so approached the table without prejudice.

What I discovered was a very straightforward co-op, but one with enough challenge and crunch to make me want to play again after our first defeat. The core mechanic is very simple, but it did take me a while to get my head around.

There are five locations, and the players need to discover the treasure in each location. The treasure must be stored along a path, which first needs to be opened. Obstacles will mount on the locations, and booby traps can be sprung. Meanwhile, an encounter deck will throw up random hindrances, including some ‘Fratelli’ cards – familiar faces to fans of the film. Players will play item cards from their hand, assisted by their characters special abilities, to take actions each round.

Here’s the thing: The players’ item cards and the obstacles that mount on each location are drawn from the same deck. These same cards also correspond to a location, and discarding a card allows movement to that location. Discarding matching symbols (different to locations) allow for obstacles to be removed), and discarding three of a kind allow for a path to be cleared for treasure. You can search a location by discarding any card.

Basically, the game’s engine is a single deck, and the puzzle is in figuring out the optimal use for every card you will draw from that deck. In each round, players can collectively take up to four actions between them – another simple but effective way of ensuring cooperation at all times. There is nothing more frustrating for me than a co-op that doesn’t require the players to actually cooperate in order to win. I see little point or fun in a game like that.

Going back to ‘The Goonies’, the usual Pandemic-a-like rules apply. The game end can trigger for the players in a number of ways: a location having five obstacles on it, a deck running out, etc. The single deck system makes for streamlined play and a really interesting puzzle. I’m only one game in, so replayability is still up in the air for me, but I’ll definitely be giving it a bash again next week, so that’s a good sign.

In the meantime, we are finally moving onto the third and final scenario in the Arkham Horror LCG core box, so expect a return to Arkham in next week’s comic. And yes, we did an Arkham comic just a couple of weeks ago, but right now it’s fair to say we’re both a little obsessed with the game, so you will have to bear with us. Or suggest some other games we should be playing in the comments?