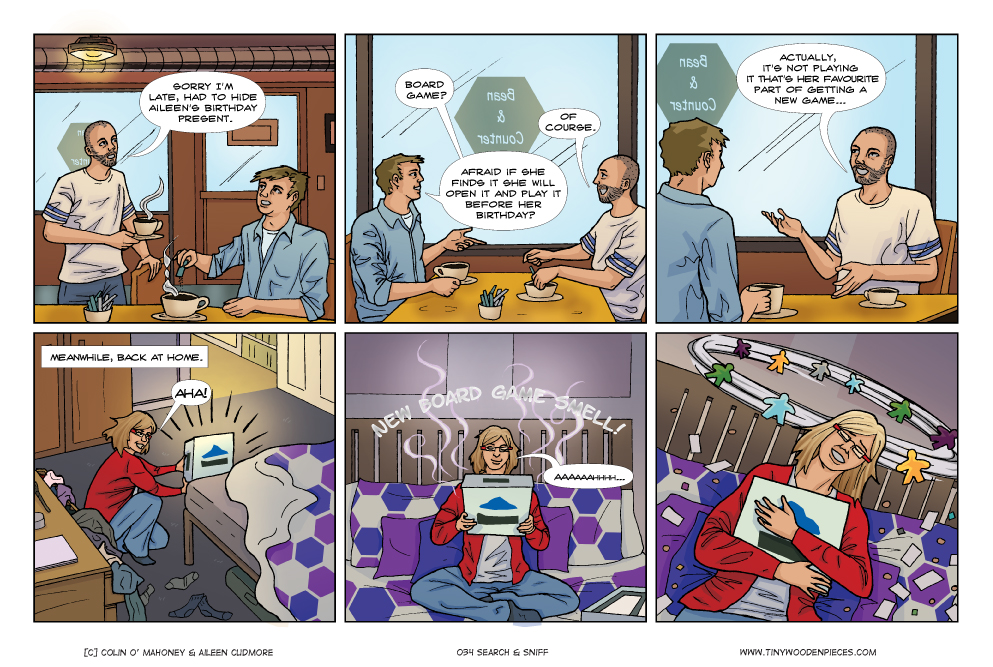 Fun fact: Last year I did hide Aileen’s present under the bed before her birthday. It’s a small house and it was a big box.

Factual innacuracy: The board game in question in today’s comic is NOT the one Aileen is getting for her birthday. I was non-specific about which board game it was in the script because it is a BIRTHDAY SURPRISE. And birthday surprises are important. Are they important enough to warrant what some might call a flagrant disregard for proper use of caps lock? I think so.

Speaking of monsters… (linking paragraphs is hard, give me a break) we’ve been playing a few games of Cyclades while we wait to get our whole group together for Risk: Legacy. Cyclades is, coincidentally, what Aileen got me for my birthday this year. Based on just two games so far, I like Cyclades a lot. Set in Ancient Greece, at first glance it seems like an area control/combat game, but it plays very different to that. The central mechanic is bidding on the favour of different Gods each turn: Ares, the God of War allowing you to build troops, Poseidon allowing for control and construction of ships, etc. By bidding on a God you are also deciding turn order.

As well as the favour of the Gods you can also offer your gold up to myriad monsters and legends of Greek mythology. Minotaurs, Medusa, Kraken and Harpies – there are 17 different beasts, all of which can be used to aid your own plans, or disrupt an opponent’s. There is so much going on in a game of Cyclades. There is so much to consider, and so many possible strategies, all of which must remain fluid enough to deal with the ever changing favour of the Gods and monsters that literally walk the earth alongside your fleets of lowly human warriors. You must balance building your civilisation with defending it against both men and monsters. Or you could just focus on building military strength and simply annex another players civilisation, planting a flag and declaring victory.

The archipelago in which the game is set is an unforgivingly small group of islands, meaning you can’t just sit it out in a far flung corner of the board quietly building and developing your way to victory. In fact, the game scatters your forces at the start of the game, meaning you have to deal with several other players as uncomfortably-close neighbours. In a very clever mechanic that I’m surprised more games haven’t copied, the board is double-sided, allowing for different sized layouts for different numbers of players, customising it so the board fits just right. And by ‘Fits right’ I mean “oh Gods I better attack first or they will be right on top of me or maybe I should focus on defending waitasecond what about that player right there are they eyeing up the Kraken are my fleets safe.”

While I’m sure I will get a better handle on its strategy after a few more games, the close player interaction and diverse number of monsters and legends affecting the game mean it will always be more about adapting and customising your plans and playing style to each game. Which, obviously, is great.

Eight Kraken thumbs up for Cyclades.

Sniffing out the cardboard

I have just enough time for a brief post this week, so I will use it to clarify a couple of things. First of all, I am not the type of person that goes hunting for hidden birthday presents, nor do I go poking at carefully wrapped gifts underneath the Christmas tree. We just put that in there for comicy fun, I swear. BUT, but, I do have to admit that I absolutely love the cardboard smell of a freshly opened board game. How could you not?! And yes, one of the very first things I do upon opening a new game is to take a lovely deep inhalation from inside the cover. It’s such a yummy scent and, call me weird, it is one of my guilty pleasures. Although I don’t usually see dancing meeples spinning above my head…