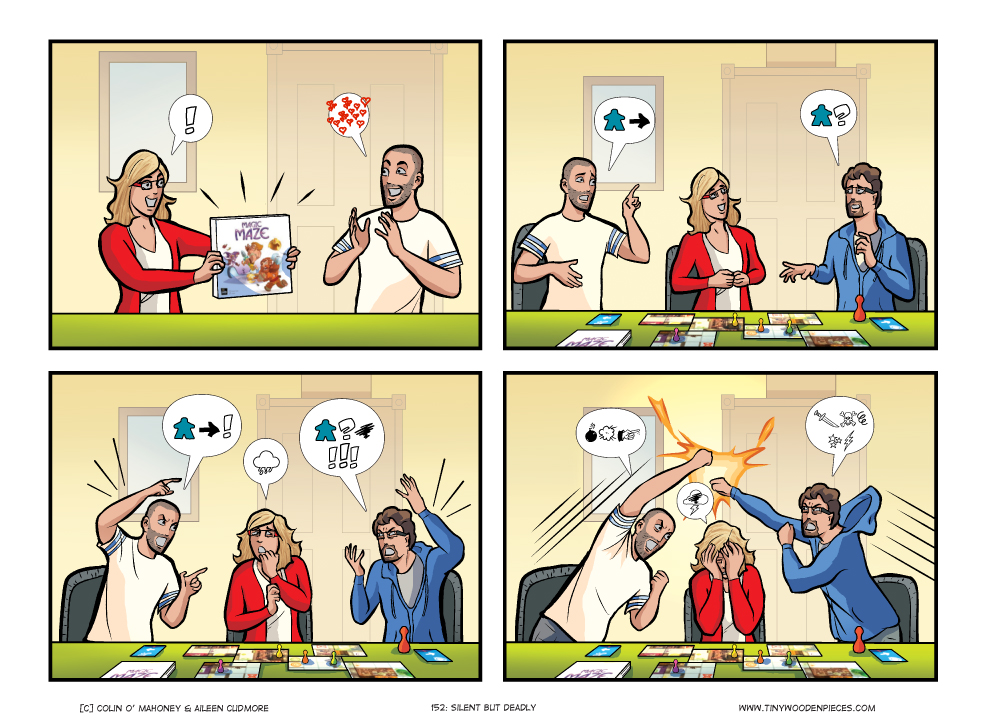 Magic Maze is a co-op game where talking amongst players is not allowed.

It is the only one of this year’s Spiel Des Jahres nominees that we have played, so we can’t say whether or not it deserves to win above Kingdomino and Race to El Dorado. Having spent just one frantic, fraught, evening playing it though, I can say for certain that it at least deserves the nomination that it got.

Ostensibly a co-op, Magic Maze will nonetheless have you so furious at your friends that the game’s ‘no talking’ restriction is all that stands between your group and forever fractured friendships.

While playing, you control four cookie cutter adventurers – mage, dwarf, elf, barbarian. You will be laying out tiles, and navigating the heroes through them to pick up items and make it to the exit.

In a brilliant twist on a well-worn theme, though, you are not navigating them through a dungeon, but through the local mega-mall. Your down-on-their-luck adventurers lost all of their equipment on their last adventure, and are forced to shoplift in order to restock. So instead of orcs and dragons, you have to navigate security cameras and guards.

Where the tension (and fun) comes in, is that while everyone is collectively controlling all of the adventurer meeples, each player is restricted to certain actions. One player can make them turn right, another left, another backwards, another up the escalator. While you can all see what is happening on the board, there are four adventurers, simultaneous play, and a sand timer.

And you can neither talk nor gesticulate to your fellow players. There is a marker that you can place in front of a player to hint that they need to do something, and you can ‘stare meaningfully’ at someone. But that is it.

Chaos ensues – although this doesn’t even begin to describe the scene, as you repeatedly slam down the player marker in front of someone who hasn’t seen that the mage needs to go back two spaces to continue on his path, because that player is focused on the elf and moving them away from where you think they should be going.

And as you repeatedly slam whack that marker on the table in front of them, their confusion goes to frustration, and you haven’t even noticed that someone else is staring balefully at you because you are paying no attention to the barbarian and the timer is almost up.

Not speaking leads to a lot of barely contained non-verbal utterances of mixed and heady emotions. To an outsider, I suspect our game sounded like the zombie apocalypse. In fact, when one of us called to check where our pizza delivery was, the alarmed lady on the phone actually asked him if everything was OK.

It should go without saying that I thoroughly recommend Magic Maze.