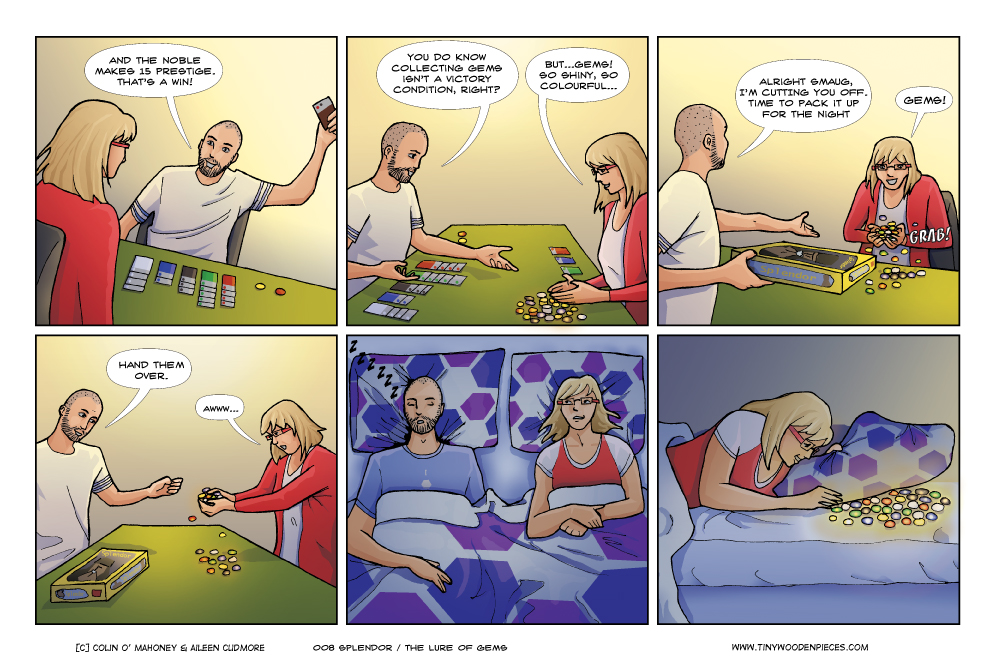 “The most prestigious prize in gaming” is something you will have been reading a lot this week.  The Spiel de Jahre has been awarded for an incredible 35 years now and is a shoe-in for the industry’s highest, and most high-profile accolade.

What’s wonderful about this is that the prize is awarded to a very specific category of games. It is aimed at rewarded those games that are perfectly positioned to get more people playing games. Family-friendly, lightweight offerings that can act as gateways to the hobby. If you’re a regular reader, you’ll know by now how important getting others into the hobby, and keeping the hobby an open, friendly environment is to us at Tiny Wooden Pieces, so nothing makes me happier than to say that this is a hobby where the most-talked about prize recognises the importance of just that. Of allowing more people to discover and play games.

As Love Letter was only recommended and not actually nominated, Splendor is the only nominee we’ve played. But we have been playing it a lot. It’s a light card game with a compelling mechanic: like Dominion but trimmed of the variety of choices and expansions, leaving a leaner play. One that should be simpler, but somehow always manages to provide a constantly shifting puzzle as to the best route to victory.

Theme-wise, players are merchants during the Renaissance, dealing in gems, aiming to amass the most prestige, measured in points by the game. This is achieved by using gems taken from the bank to purchase cards, which give a discount, allowing for the purchase of more expensive cards that come with prestige points. Accumulate an impressive enough collection of gems and you will pique the interest of local nobles; a visit from whom will increase you prestige even further.

Reviews, while being positive, have tended to describe the game as ‘fairly abstract’ – being really light on theme. At first glance, yes, the theme is simply sprayed on. It is more the hint of a sparkle than an actual diamond. But on playing the game, I was delighted at how the theme is subtly worked into the game on so many levels: it is there to be unearthed, if the player is willing to dig just a little to discover it.

The cards on offer to the player are presented in three consecutive rows, getting more expensive with each row, meaning the player takes cards from the first row, progressing to the second, then third. Looking at the artwork, the first row represents mining gems, the second either refining or shipping them, and in the third there are city streets, where the gems are sold. As cards are bought, they are replaced so there are a constant 16 cards on offer. There is no set price for cards. Sometimes a single ruby will cost you three gems, sometimes four or five. The players are at the whim of what the market offers, and if there is only one opal on offer, players will be willing to pay more for it. This simple set-up does a remarkable job of simulating the whims of a real marketplace, and the acquisition of ‘prestige’ is a fine balance between race and clever decisions, and the sudden interest of the upper crust in new wealth tops it all beautifully.

And there’s a stoat

The beautiful thing about Splendor are the hidden depths that lie beneath its seemingly simple set-up. This applies not only to the gameplay, but also to the sumptuous artwork on the cards and box.

The nobles, for instance, are not just some random members of the Renaissance aristocracy. That guy that looks like Henry the VIII is actually Henry the VIII. And he might just lend you his support if your mercantile empire becomes the most successful supplier of the right kind of gemstones.

And so all of the noble cards represent real historical figures from the Renaissance period in Europe. This includes a certain Anne of Brittany, who is also pictured on the side of the box with a white stoat peeking over her right shoulder. Not being a native of Brittany, this seemed a little incongruous to me at first. But it turns out that ermine (winter coat of the stoat) is actually an emblem of Brittany and that Anne, the last independent ruler of Brittany, fiercely fought to retain Breton autonomy her entire life.

It is this kind of detail that shows just how much care and loving attention the designers have put into the game. Players are gently immersed in the theme and it is left up to each individual to delve deeper if they so wish. With these subtle layers of complexity both in the illustrations and in the gameplay itself, players are guaranteed to come back for more.