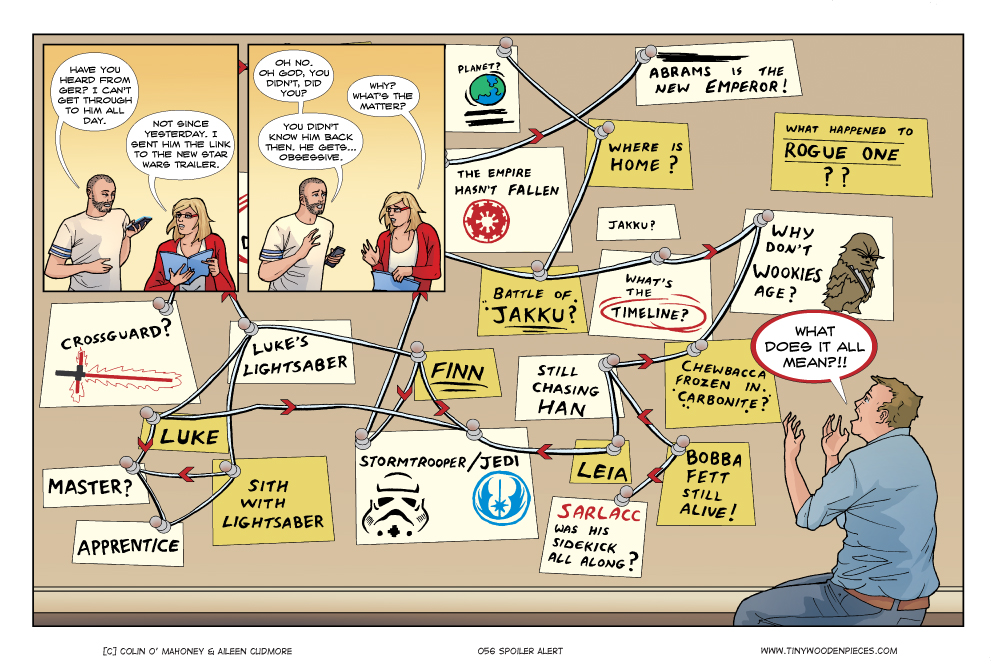 This one simple hobby will amaze your hipster friends

I think this is the first time Tiny Wooden Pieces has wandered completely outside of our stated subject matter. The plan was always to focus on board games, but mix in other elements of what the kids call ‘geek culture’. And if Star Wars doesn’t happily fit that term then it’s time I hung up my keyboard. Which would mean dismantling my laptop to get at it. And slow, and often frustrating as it is, I’m not quite ready to take that step. And that’s why this week’s comic is about the Star Wars trailer! (see how I tied it all together?).

If you do find yourself on the site just because it’s a Star Wars comic, I’m afraid the rest of our archives are filled with cardboard, dice, counters, and the eponymous tiny wooden pieces. But board games are cool now, so if you don’t want to get laughed at by your tight-trousered, long-bearded, hipster friends you had better read our archives and familiarise yourself with Catan, Netrunner and Dead of Winter. There’s just about enough time left to say you liked board games before everyone else did. You do want to be cool, don’t you?

Happily, board games are more and more popular now, which means either more people will come to board games via Star Wars-licensed board games, or there will be more Star Wars-licensed board games because there are more people coming to the hobby. I think? Either way, more Star Wars board games, and that delights me. Although I promise we will leave it at least a few weeks without doing a Star Wars comic of any kind. We’ve been discussing this recently, and we have been sci-fi heavy on the site. Obviously the comics we make come from the games we play, and we are both sci-fi fans. But Aileen has been wanting to try and diverse a bit, and I can’t argue with trying different genres and game-types. So in our game playing we will be looking to lean more towards Euro-titles with less of a focus on combat, lasers and Wookies, and more of a focus on exploring, building, heck, anything at all. The themes and game types covered by modern board games are just so diverse, it’s incredible. It almost feels like a disservice to limit ourselves to any one type. So we will be happily broadening our horizons in the future.

In particular, Aileen loves the idea of a game that involves an element of exploring, and personally I love the idea of games that feature multiple paths to victory. I have played a few games that ostensibly offer this, but it’s hard for a game to avoid having one particular path that just makes more sense, or makes for an easier win than others. I’ll be diving deep into Board Game Geek in the coming weeks, and of course, welcome suggestion if you have any…