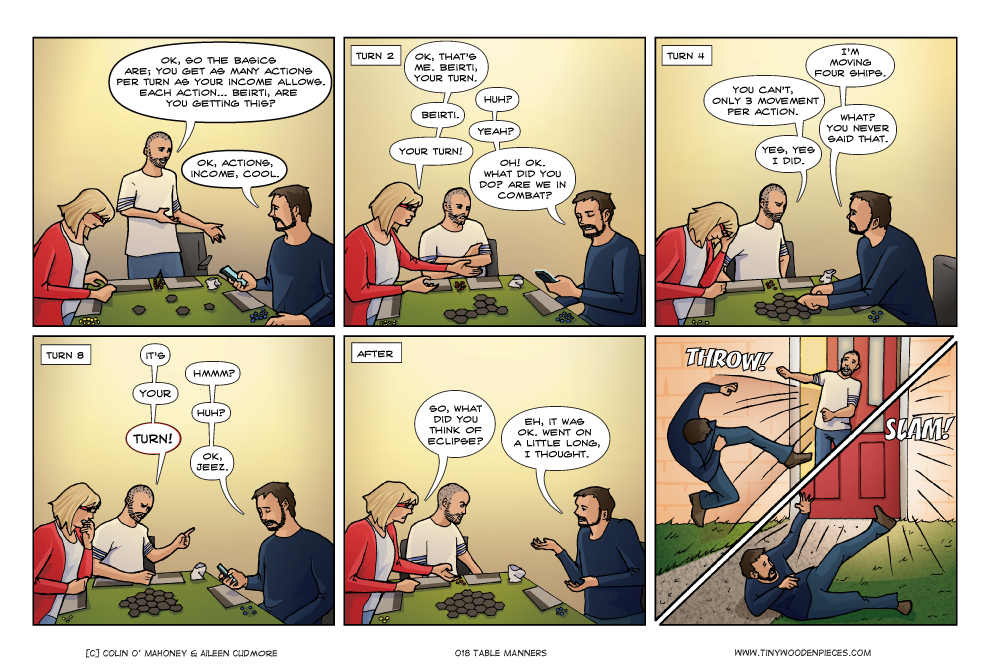 I have a feeling this will not be the only comic to bear the title ‘Table Manners’. Issues like this (table etiquette, I guess you could call it) are oft-discussed (just listen to the questions segment on any Dice Tower Podcast). Phones are not the end of it, and neither are they even the beginning.

But they are tricky one. People are people, and these days phones are part of people. Asking people to put away their phones at the table seems a little … school-ish? It’s not that I don’t want to do that, it’s more that I don’t want to have to do that. I would rather that situation just not arise, that people would come to the table with respect for the company they are in.

It affects some games more than others, obviously. It’s not too big a deal for light games or party games, but it can really slow down ‘bigger’ games. Where it hurts the most, though, is not slowing down a game, but bringing people out of a game. When everyone around the table is immersed, transported to somewhere else. When a box of cardboard has become a door, a portal to somewhere that its raw materials could only hint at. That’s when constant phone checking and messaging can ruin the experience. The game might be able to go on, but the experience can be lost, leaving the thing itself to limp awkwardly to its conclusion, exposed as nothing more than cardboard, dice and plastic.

It’s not just phones, of course. It can be achieved without the aid of a handset. One person at the table who doesn’t really want to be there, and that table will collapse as surely as if they took a saw to its legs. In this case, a phone is merely a symptom of a different problem. One that still needs to be addressed, just differently.

There’s a lot more to be said on this, obviously. This week we’re a little pressed for time, so the post is short. You may even have noticed we were a little quiet on Twitter.  But if you have anything to say on this matter (and if you’re reading a comic about board games I imagine you do) then please let us know. What are you experiences, views and solutions?

Pull up a chair, grab a hand of cards, warm up some dice, and click into the comments below. Come, sit at our table and talk to us.

Unless you’re the type of person who messages the whole way through a game (or talks through movies.) Then it’s a good old fashioned Jazzy Jeff exit for you.