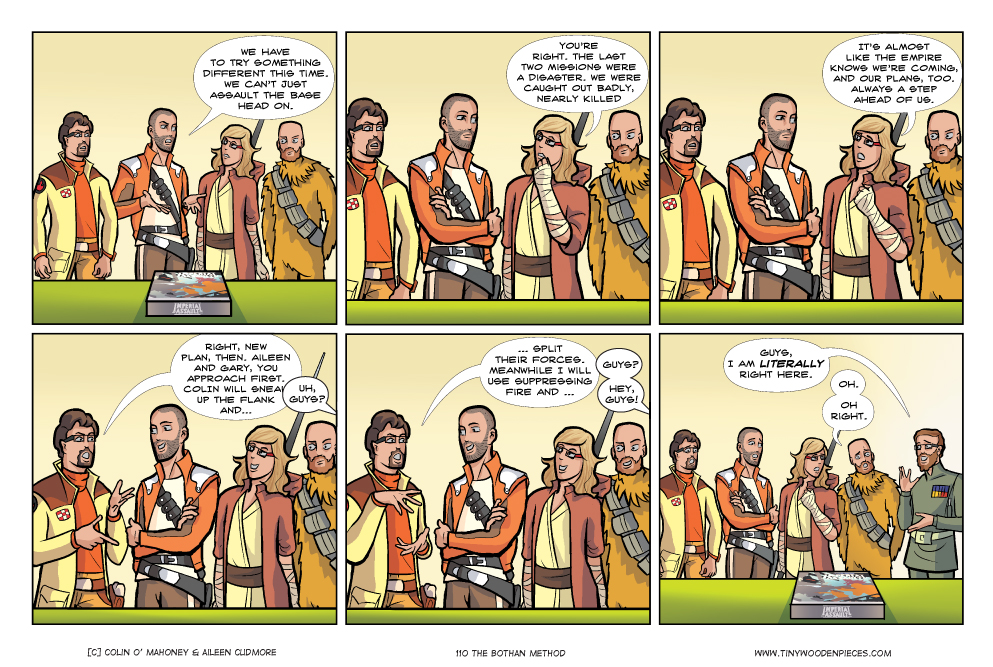 We’ve been talking a lot about giving roleplaying games a try. Our group has not managed to get anything organised though, which has led to a lot of thinking about DM-ing.

The ideal scenario is an experienced player takes on the mantle of DM and runs the game, allowing us to try roleplaying without spending ages struggling to find our feet with a type of game that has so many differences to board games. But neither myself or Aileen have that experience, so lack a good place to start.

After some research, I decided to order an RPG called ‘Fiasco’. Games of Fiasco are done in one session, and are run without a Games Master of any kind. It’s only just arrived, but it looks great, so hopefully more on that in weeks to come.

Imperial Assault, which this week’s comic is about, is something of an odd halfway house where the issue of a Dungeon Master is concerned. While it’s obviously a board game, and not an RPG, it does fall to one player to ‘run’ the game, and the campaign.

But that player is also the Imperial player, and is not just running things, but playing competitively against the Rebels. Levelling up the same way, rolling the same way, fighting in the same battles, just on the side with all of the Stormtroopers.

More than one review I watched or read of Imperial Assault mentioned this issue: It’s a tough balance for the Imperial player to strike, and one that can make or break the game for the entire group. If they are too aggressive there is the risk that they can run rampant over the Rebels. But obviously they too are looking to win in any given game, so it falls to the Imperial player to get that balance right, in the same manner it falls to a Dungeon Master to create the best experience for their players.

Pertaining more directly to the comic, the game also creates a weird situation where it is 4 players against 1, where planning is really important. If the Rebels don’t work together and plan their assault, they don’t stand a chance.

But you’re effectively left planning things in front of the Imperial Officer who is trying to stop you. It’s a bit much to get up and leave the room in between every turn (and that would be pretty crappy for the Imperial player), so it’s something we’re still figuring out. Hand signals? Time will tell.

For now, I will say that Imperial Assault is an absolutely cracking game. It’s an excellent co-op (for the Rebels) it’s tense, and seems as well balanced as Pandemic. All of our games have come down to the last actions of the last moves of the last turn.