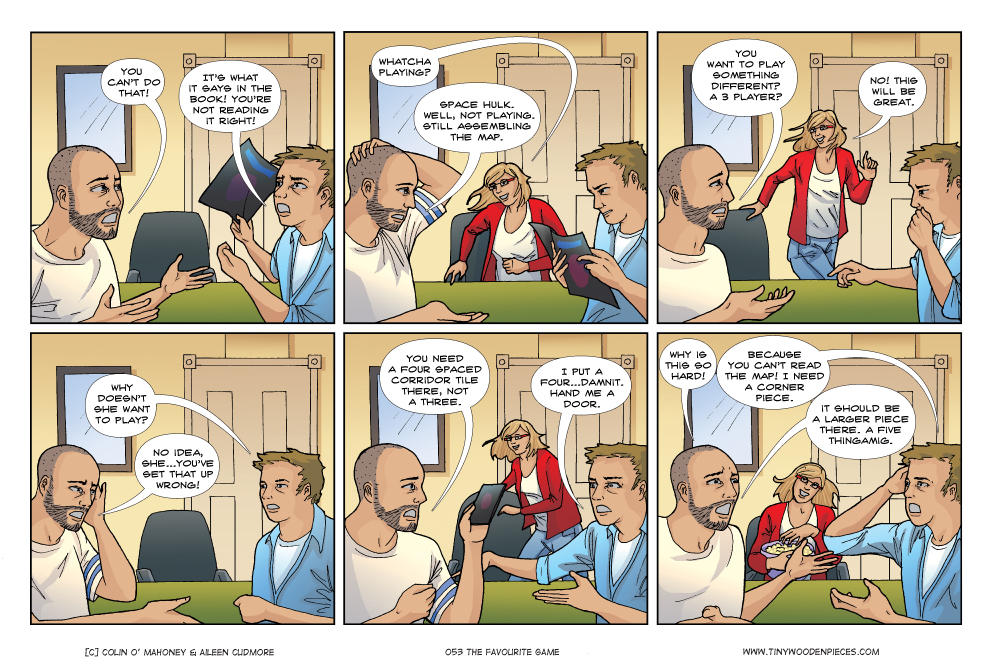 If anyone is wondering whether or not this week’s comic was named after the 1963 Leonard Cohen novel of the same name: don’t be crazy. Of course it is. Like any right-thinking individual, I love ol’ laughing Lenny. Like-minded literary readers will know that the novel has nothing to do with the noble pursuit of tossing dice, hefting counters and shuffling cards, but I’m still going to use it to segue into that very topic.

It’s been a while since I read The Favourite Game, and it’s also been awhile since I have played Space Hulk (smooth, right?). Aileen has never played Space Hulk, but she loves it just the same, for exactly the reasons detailed in the comic. Any situation that puts myself and Ger in any kind of conflict or even mild opposition is guaranteed, for her, to yield entertaining results.

For my own part, the last time we did a comic about Space Hulk, I hadn’t actually played it, and was dubious about the value for money that a 100-plus dollar game represented. I have played it a few times since that comic and blog post, and while I’m still not certain it’s a game worth that price tag, it is an excellent game. Of that there is no doubt. It’s a tactical and tense battle where victories are hard fought, and a loss always leaves you thinking about what you could have done different, or better. The kind of game where the post-game analysis can take up as much time as the game itself. And a game that generates that much discussion is, for better or for worse, remarkable. In this case, it’s very much for the better. The maps that these battles are played out on are genuinely sprawling mazes made up of claustrophobic corridors, life or death junctions, and unrelenting tension. And boy are those maps big. Games Workshop doesn’t shirk on quality, and the box is crammed with high quality corridor and room tiles, so that the setting up of the game can take a not-inconsiderable portion of an evening. And all of the table. We have a custom 6 x 4 board that sits on top of our table for gaming, and it just about managed to fit in some of the maps. Others, we didn’t even attempt. An added bonus of the maps we did attempt was the entertainment value offered to bystanders, and an unexpected comic.

Come back next week, where we stop even pretending to be focused on our stated subject matter and just do a Star Wars comic. Probably. I mean, how are we expected to get any board games played when there’s that trailer to watch. Maybe we could play some X-Wing.