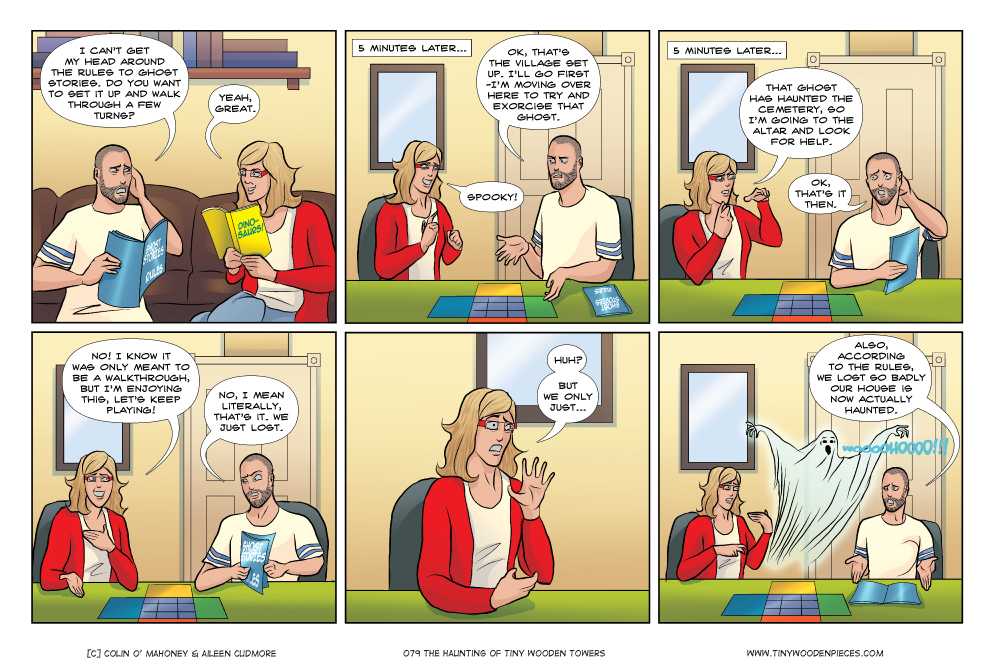 The first two nights we played Ghost Stories, the combined length of both games probably didn’t add up to an half an hour. It beat us mercilessly, and I loved it for it.

The third time we played it, Aileen found a great rules reference online, and, more to the point, found some mistakes we were making. That time we won. It’s a tricky game, just not that tricky. I am now looking forward to trying it on the harder difficulty settings, and finding a level where it’s seriously challenging again. Winning is fun, but only if you have to work for it. The comic is exactly how the first game played out, by the way. Except for the ghost. He’s actually been in the house a lot longer.

The other delight I found in Ghost Stories was a co-op game that rewards players working together. In fact, I’m pretty sure the harder difficulty settings render any other style of play unworkable. By which I mean unwinnable.

If you don’t want to hear any more about Ghost Stories, here’s where I lose you. Because here’s the final trick the game has up its spooky sleeve; here’s what’s really clever about it: Theme.

Mechanically, it’s a game about hordes of undead attacking a board, and the players need to fight the enemy off using a mix of pick-ups and help from the area they are in. Areas can be overrun and be rendered useless. You might see what I’m getting at: the obvious theme here is zombies. It’s a hugely popular theme and fits the mechanics like a rotting glove. I actually have no problem with zombie games: I think they’re great fun, and don’t feel it’s been overdone (yet). But what Ghost Stories offers is so much more interesting; so much more exciting.

You play Taoist monks defending a small village from Wu Feng: Lord of the Nine Hells. You are exorcising a gruesome variety of ghosts, from skinners to soul eaters, from dark wraiths to black widows. Wu Feng himself manifests in ten different forms, each a unique challenge to defeat. The players use coins, incense, bells, gain help from tea rooms, altars and sorcerers. For all my talk of the difficulty and fun co-op, it might honestly be the theme, and the brilliant accompanying artwork that has me most excited about Ghost Stories. And I’m certain that if it had been just another zombie game, it would have never caught Aileen’s eye in the first place.