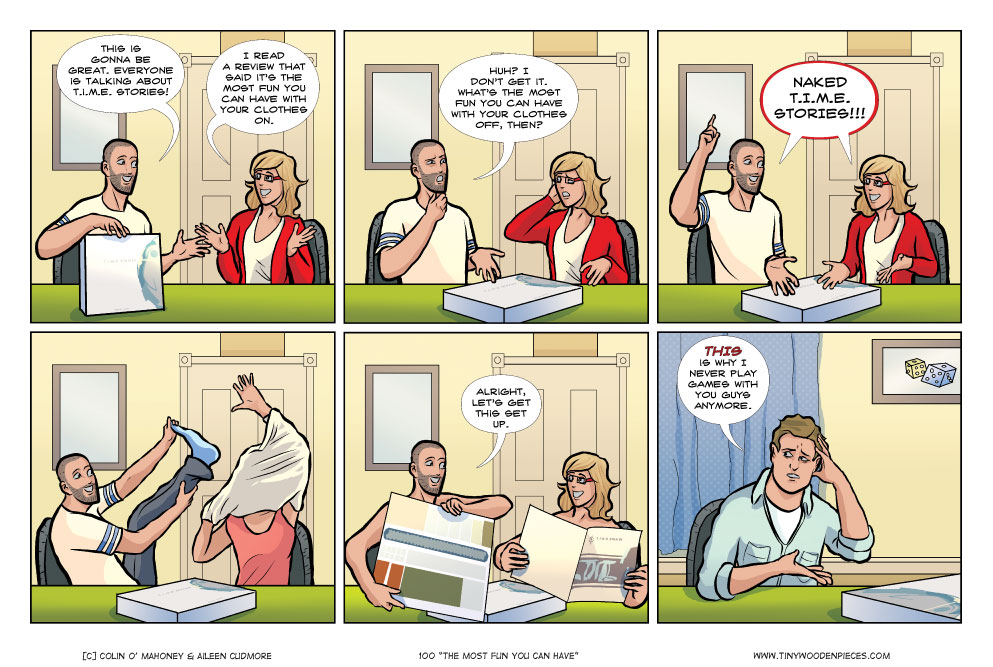 What better way to celebrate a 100th birthday than taking your clothes off. Also I can now cross ‘take my clothes off on the internet’ off my bucket list. (it’s a pretty weird list, and I won’t lie, there are more than one Shia LaBeouf-related items on there)

I don’t honestly think either of us ever thought we would get to 100. It seems crazy now that we have, but two years ago it was laughably so. But we did, and we don’t intend on stopping, and if you’re reading this, it’s because of you that we are still going. So thank you. We would love to have done something special, something more for number 100, but unfortunately things are a little crazy here at Tiny Wooden Towers.  Aileen is wrapping up college just in time for a wedding abroad, and when we come back we have a house move (so many games to pack up!). But we still plan on doing more with the site, the least of which is a design overhaul. Just a little later on in the year now.

So for now we’re just gonna run a contest, to make it feel like we are doing something special. If you leave a comment on this week’s comic, you will be entered into a draw to win a signed A3 print of your favourite Tiny Wooden Pieces comic. Any comment will do, all will be entered. And you don’t have to list your favourite comic either, that can wait until a winner is announced. But we won’t hold it against you if you do list your favourite comic. We would love to hear what some of people’s favourites have been. The competition will run until midnight next Thursday GMT, so we can announce a winner next week.

So for now, thank you all so much, and I look forward to hearing from you in the comments.