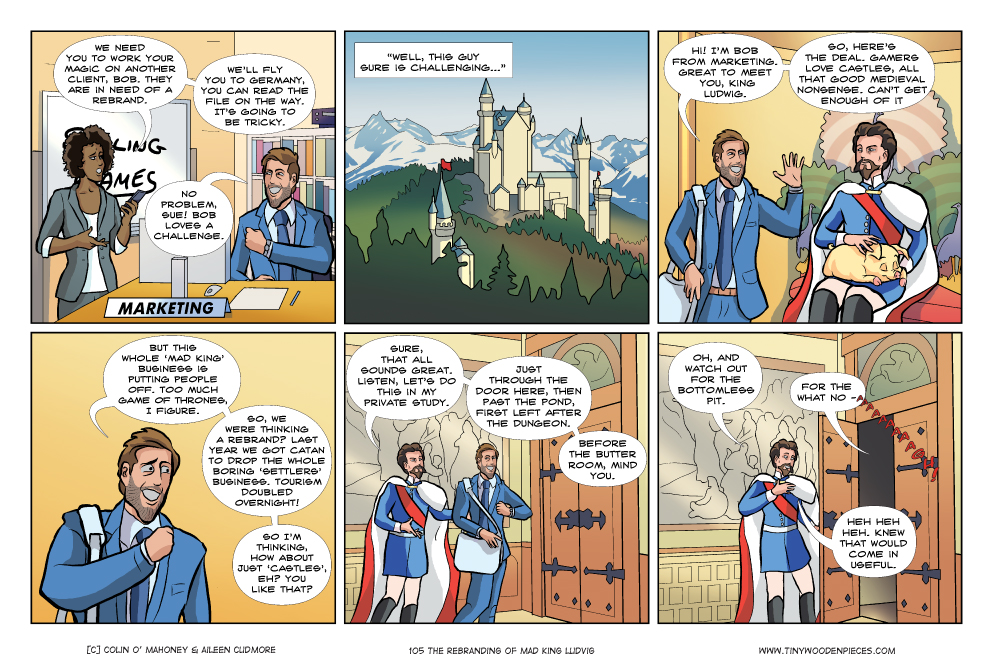 The Madness of King Ludwig

It’s the return of Bob from Marketing!. I like Bob. As someone who wore a suit to work and for too long, and used words like projections, going forward, core competencies and best practice, it’s nice to have a chance to skewer that culture of nonsense. And people that refer to themselves in the third person. If anyone deserves a skewering – literally – it’s people who do that.

The Peacock Throne of Mad King Ludwig is, quite marvellously, based on fact. His pet pig, sadly, is not. Although I do feel it’s at least a pretty safe assumption that a mad king would have a pet pig. Why would you not, in that position?

While the theme of ‘The Castles of Mad King Ludwig’ (or just ‘Castles’) is interesting, it’s one of those games that I feel I need to play to understand the appeal of. On paper it sounds somewhat dry. But with the acclaim the game has received, I’m pretty certain that’s misleading. I remember when I initially heard and read about Pandemic, I didn’t see the appeal at all. Curing diseases? Playing as a researcher? Travelling around the world healing and collecting cards just didn’t make sense to me, yet anyone who played it was just so excited about it. I guess the moral here is that I would make a lousy talent scout – the board game world’s equivalent of the man who turned down The Beatles.

I saw the announcement, but other than Codenames, I’m honestly not familiar with the nominees for the Spiel des Jahres this year. Anyone played either Karuba or Imhotep? Anyone want to make predictions as the which the winner might be?

Man, I bet that pig just loves the butter room.