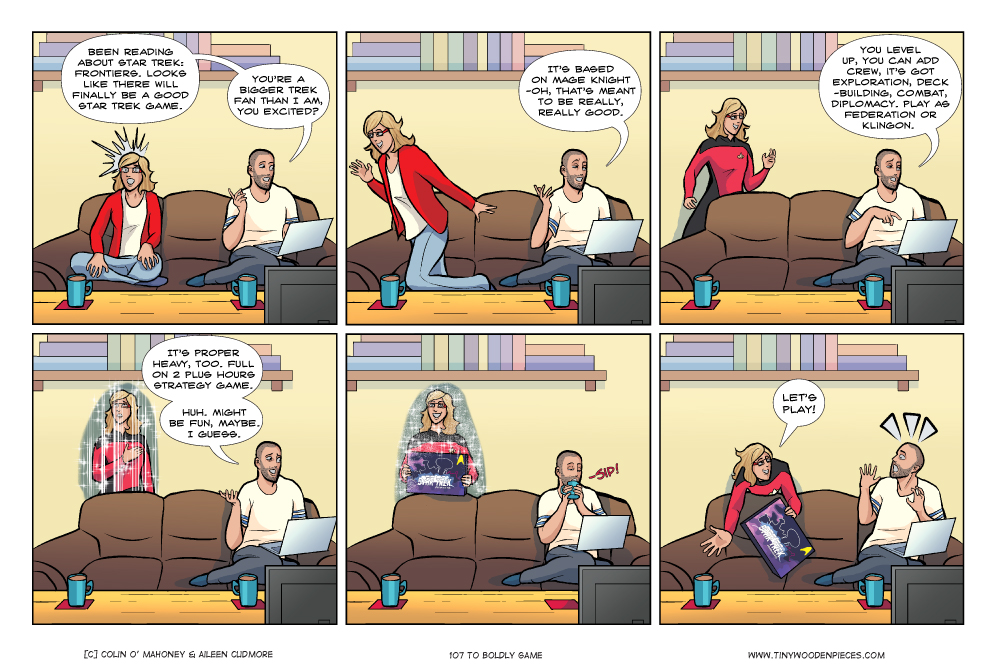 “You’re a bigger Trek fan than I am” is an understatement. I was never much taken with Star Trek. The Next Generation, which was my generation’s Star Trek, passed me by completely. It already seemed to me to be dated by the time it aired, but lacking even that kitsch, novelty appeal of the original series, which also seemed to me to do a better job of the science fiction elements. The drama of the Next Generation always seemed to be set on the bridge, and seemed to me to be somehow distant from the alien life it supposedly explored. Of course, science fiction is just a speculative way of exploring human drama and issues, but the appeal of Next Generation always seemed alien to me (no pun intended). (Actually, of course I intended that pun, how could I resist?)

The only Star Trek series I ever did watch was Voyager, of which I was a big fan. I am given to understand that this is considered an even bigger anomaly amongst real Star Trek fans than not being a Trek fan in the first place.

So while not as excited about Star Trek: Frontiers as Aileen is, I am still excited about it. Because even if you strip away the license, this game is right in my orbit of interest. For starters, it’s sci-fi, so that’s a big plus. Mage Knight always looked amazing, but I just wasn’t willing to invest that much time in a fairly generic-feeling fantasy setting. Sci-fi is closer to my heart, and the idea of flipping hexes to uncover new systems, planets, and alien races seems exponentially more exciting to me than doing so to reveal hills, castles, goblins, and knights.

Eclipse is still a top ten game for me and, as a deep sci-fi strategy game, Frontiers feels close to it. But if you strip it down to its (warp)core, it utilises a wholly different set of mechanics than Eclipse does. Each player controls only one ship, but can still level that ship up with modifications and crew as the game progresses. I think this is where the deck building comes in, as you add to your abilities. Cleverly, if you are dealt damage, this is represented as damage cards that go into your deck. There are 11 scenarios in the base game, and these represent a mix of co-op, solo, and competitive play. The Dice Tower actually did an excellent and informative review you can watch here.

While we intend on going next year, we unfortunately didn’t make it to this year’s UK Games Expo. If you were there, we would love to hear about it. What was the big buzz at the show? What was everyone playing or talking about? What were the events like? Make us jealous!