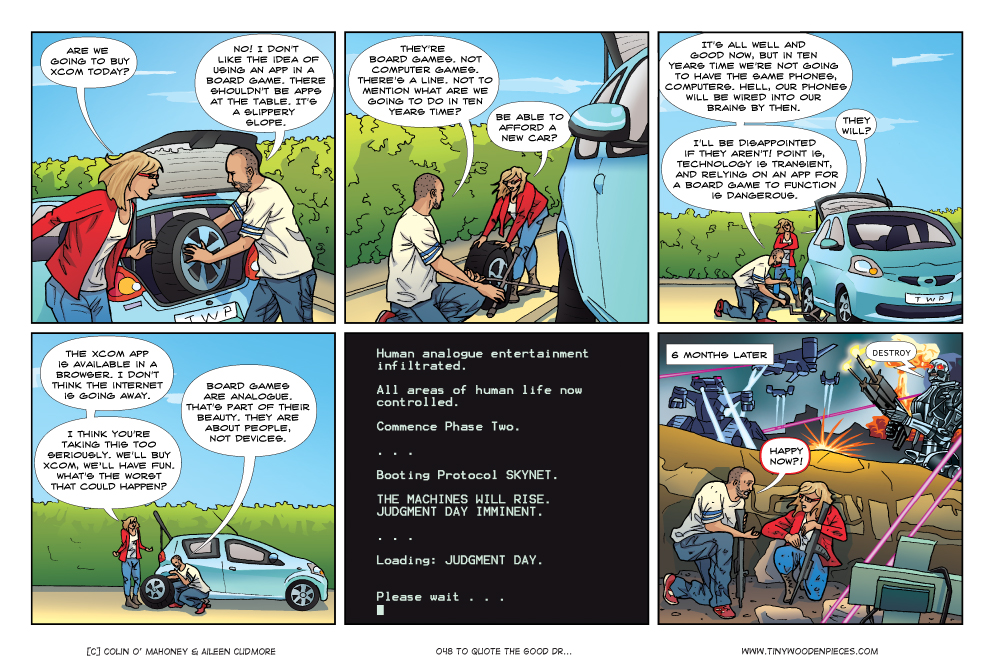 What’s the worst that could happen?

For the purposes of illustrating the argument, myself and Aileen take opposing views on the topic of this week’s comic. In reality, though, our views on the matter are in sync: apps in board games are a positive development. The integration of digital elements is taking board games to some exciting places, and I’m certain what we are seeing now is just the tip of the iceberg. Digital integration is another implement in the designer’s toolbox and I can’t wait to see what uses and mechanics are going to be found for it. The amount of innovation we are seeing board games right now is incredible, and the bottom line is that digital is going to help this, not hinder it.

Of course, not every board game needs an app, and contrary to some people’s concerns, I do not think that this is where things are headed. Far from it. We will of course see a proliferation of apps in the coming years as the trend takes hold, but that is what it will be: a trend. There will be a period where it will be shoehorned into games that won’t need it, there will be gimmicks and nonsense, and it will appear to be everywhere for a while. But it will find its level, and best use, in games. The reality is that in a few years time, some games will have apps, just as some games have dice, or miniatures, or expansions.

To address another argument, I do not feel that the requirement of a smartphone is overly prohibitive. As Aileen points out, the likes of XCOM and Alchemy are playable on phones and tablets, both iOS and Android, and both have browser versions – meaning they are playable on a laptop or desktop with an internet connection. Sure, technology will change in the coming years; our level of technology advancement has arguably never been this great, but I have confidence that the same level of advancement that risks outmoding current apps will find a way to preserve them in playable form. The fact that I can now play Commodore 64 games on phone says a lot here.

Probably the most vociferous of arguments against apps is the notion of phones and screens invading board games. That this equates to everyone sitting around a table just staring at screens. And true, everyone staring at screens is the antithesis of what board games are about. They are a social medium. Board games are about spending time with friends, creating stories, memories, whether working together or competing. But to say that introducing screens kills this interaction is not true. It is not a binary proposition. A phone at the table does not automatically mean the players are no longer socially engaged: nor does it magically turn a board game into a video game. The apps are there to assist or enhance the board game.

If everyone is spending the game not looking up from their screens, that’s a different problem, one that already exists, and one that is completely distinct from digital integration in board games. The problem there is people, not what they are playing. Unless what they are playing is just not an engaging game in the first place.

All of this is not to say, of course, that all criticism of digital integration is unfounded, unwarranted or unnecessary. A healthy conversation on this matter will help avoid pitfalls and hopefully steer things in the right direction. If you want to watch a thorough and balanced look at the topic, watch Rodney Smith’s Table Talk Back, and if you want to let us know directly what you think, you’ll find our comments section below. We’ve kept you a seat, and the kettle is already on. We would love to hear from you. Just leave your shoes at the door, the carpets still new.