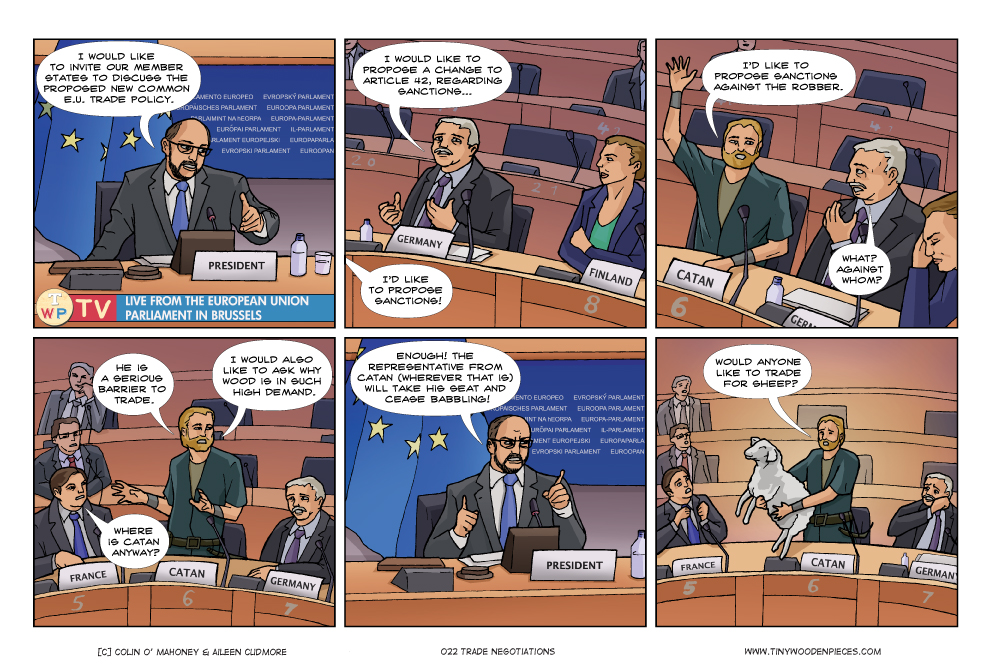 It’s been a while since we visited Catan. I always knew we’d come back, though. Catan holds a special place in gaming. That hexagonal hub represents the emergence of the board game from reluctant family gatherings at Christmas to college dorms, and apparently, even Silicon Valley boardrooms.

Catan represented an important shift in the perception of the hobby, both in what it was, and who it was for. All of this I have already touched previously, and I’m sure everyone has an opinion on Catan – not all as rose-tinted as mine, I would imagine.

Something else that I love about Catan, the world’s most perfectly formed land mass, is how nicely thematic it is. Being a Eurogame (hence it’s obvious place in the E.U.) it’s not loaded with theme, but falls on the right side of the theme/mechanics spectrum for me. Catan is small, tidy game with a very reasonable playing time. Its simple rules are easy to learn and never create complicated situations. In all ways, then, Catan is as self-contained and easy to navigate as the island the board forms. And while all players stake their own claim on this island, it’s not what you’d describe as roomy. It’s hard to even stretch your legs without tickling your toes on someone else’s wheat fields. Hence all the trade. If you’re going to be peering across the road at your neighbour all day, you might as well get to know him, and see what those sheep he is rearing taste like while you’re at it.

Catan in fact, has just the right amount of theme to allow players to know the world they’re playing in, while leaving enough room for them to populate it with their own stories. If a game is all theme and story there is often not enough room left for the imagination and storytelling. Catan on the other hand is an unsettled land waiting to be populated with the absurdities, whims, and stories of the players. And it’s this balance that means Tiny Wooden Pieces is altogether likely to keep coming back to its unusually angled shoreline.