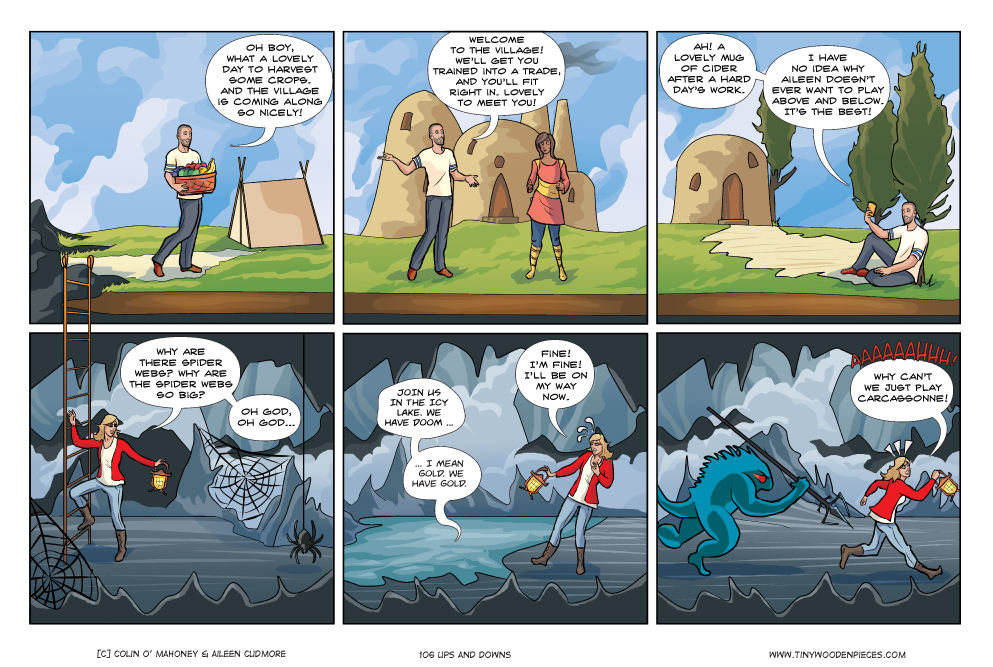 It took three games of Above and Below before it really clicked with me.

I realised afterwards that with each of my first three plays I was essentially adjusting my expectations until they matched the game I was actually playing. When they did, when I understood its weight, and where on the spectrum it fits, I loved it.

Above and Below is a worker placement, village building, gorgeously illustrated game whose unique selling point is the addition of a storytelling element. Shortly after breaking foundations on your village, your would-be real estate development moguls (villagers) discover a network of caves directly below the site. When acquiring new buildings in the game, you can choose to do so either above ground or below. If you choose below, you first have to send some brave, lantern-bearing explorers (villagers) into the system of caves to find a good spot for an underground outpost. At this point, you randomly determine a, well, a random encounter from a generous manual that comes with the game. This will give you several options that will test both the attributes of your villagers, and often your own morality (or lack thereof). Bargain with the blind merchant, or beat him up. Help rescue the fish boy, or ignore him and grab the tempting looking locked chest.

On first play, the story-telling element seemed light, a little too random, and often not worth the effort it took in terms of in-game resources. Meanwhile, the worker placement, village-building aspects didn’t seem to offer enough depth or options to really satisfy me. It seemed too light to be engaging, and too limited to warrant much replay.

The second time we played, I had already adjusted to the (really quite short) limit of 7 rounds in the game, and changed my strategy accordingly. A resounding defeat to Aileen in that game taught me quite a lot about the victory conditions, and exactly what mattered and to what extent.

Game three was with three players, which definitely added to the experience. More people meant the resources were cycled through a lot quicker, and a lot more then became available in their place. By then I had also learned that the storytelling was not in and of itself an overly important part of the gameplay. While it was arguably what got the game so much attention in the first place, it’s a simple enough mechanic, the trick to which is just to allocate the correct amount of resources (villagers) to it. It is merely another place to put a worker, albeit one that adds a lot of colour and welcome humour to the game.

Above and Below is a much lighter game that I first thought, but it knows this, and the tight round limit means it never outstays its welcome at the table. There are multiple paths to victory, and a variable set-up and randomly drawn buildings and resources mean you will have to adjust how you play, each time you play. It’s easy to learn, and easy to teach. The artwork is amongst the nicest in our collection, and the storytelling aspect, although slight, adds a fun dimension to it. In short, it’s a gem of a game that engages without taxing, and it’s one that I’m very eager to keep on playing.

And in case anyone is wondering about our own morality, somewhere in a dark cave underneath an innocent looking village there lies a blind merchant, robbed of his wares, hoping to find help before the fish people find him. And Aileen will try and tell you that she is the nice one…