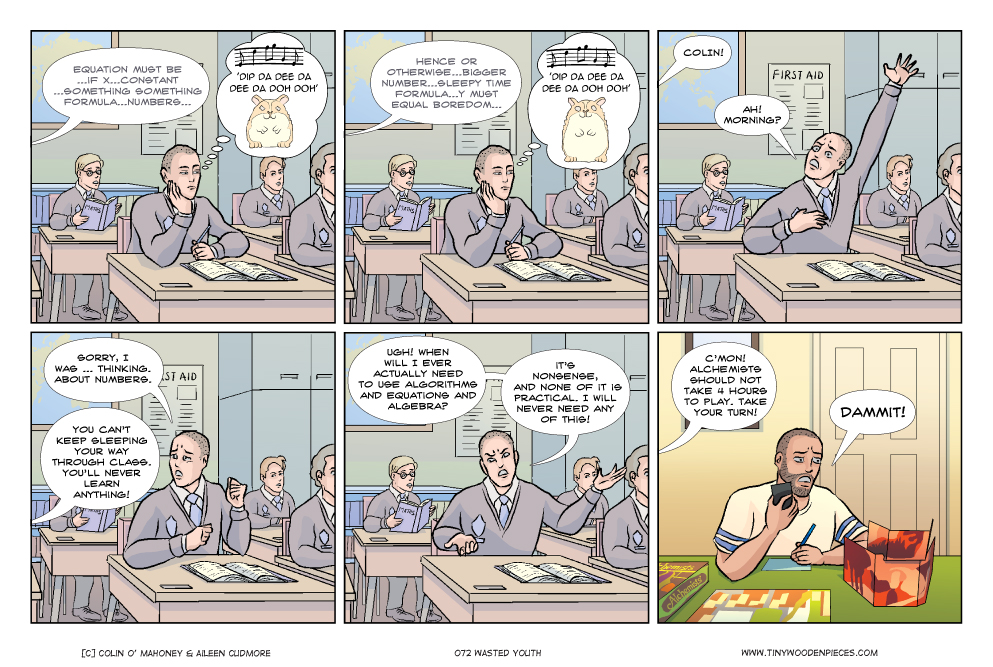 I love Alchemists. It’s clever, packed with theme and beautiful artwork, it plays really well and provides a real challenge. But I really struggle with that kind of maths. And by ‘that kind’ I mean any kind. Not what my brain was built for, and no amount of schoolin’ was ever going to fix that.

It wasn’t until many years after I left school that I came to realise just how unsuited the Irish formal education system was to me. Learning that the difficulties I had were more a matter of suitability than relative intelligence was a liberating revelation, but not one that should have come afterwards. Repetition and learning by rote really doesn’t work for me as a method of education, and that’s all that was on offer. All that remains on offer, actually, to people growing up.

Talking about how poor formal education is at primary and secondary level actually angers me a great deal, so I’m just going to suggest having a look at the brilliant Ken Robinson talk on the subject. The subject in this case being ‘Do schools kill creativity?’ which, I think, says it all. It’s an inspirational video though, so do watch it. In the meantime, I’ll talk about something else. Like some other comics I’m working on!

A short webcomic I did was recently posted here. It’s a 5 page story designed to emulate old skool adventure/sci-fi comics that were packed with action, war heroes, and otherworldly adventures. Rogue Trooper was always a favourite of mine, and this is my love letter to that era of comics. It’s the first chapter of an intended longer saga. I have a whole arc plotted out, and if the first part is received well enough, we’ll continue the story.

I’m also a part of Turncoat Press, a local small press publisher, and you can find (and download) our two anthologies to date here. I edited, lettered and wrote a lot of the stories in these volumes, and it’s quite different to Tiny Wooden Pieces.

Oh, and if you’re of a certain age (i.e. younger than I am) you might need a point of reference for what I was daydreaming about in class. Apologies in advance if you’ve never seen that.