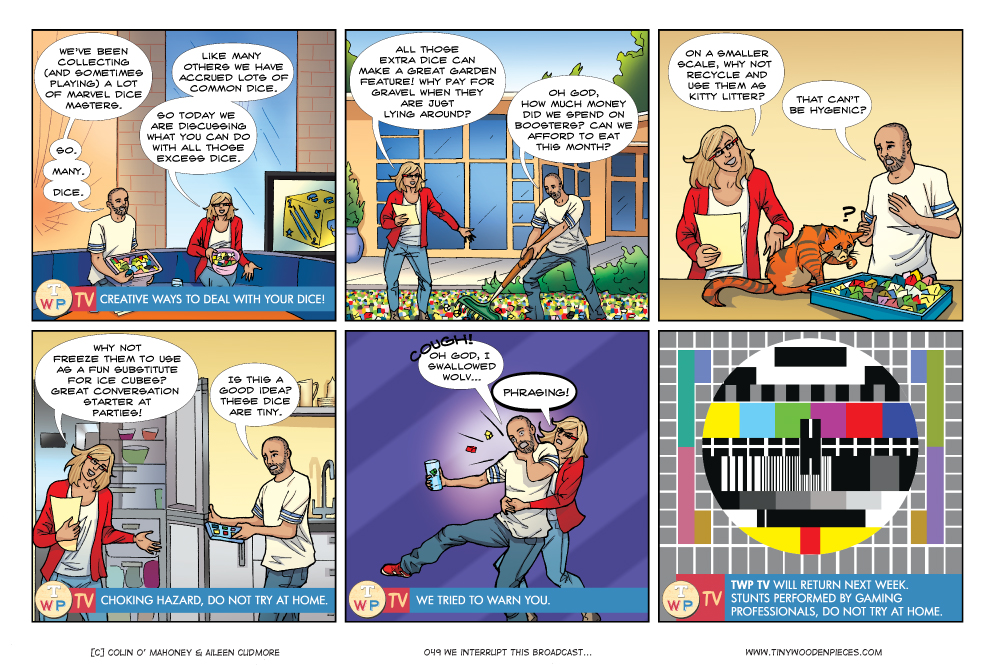 A deluge of dice

A short post this week, but normal service will resume next week. I’ve spent the week putting the finishing touches to a local comic anthology that I am editing, so my time has been stretched too thin to hold anything more than a brief post for this week’s comic.

Unfortunately, when my time is pulled in different directions, gaming tends to be the first casualty, so tomorrow will be the first chance I have had to play anything in a while. Tomorrow night at gaming we will be returning to Legendary Encounters: Alien. Two weeks in a row this game has really kicked our asses, so this week we are determined to turn the tables. Third time lucky, I guess. Except for Alien movies. If our luck follows that trend, we’re doomed. In any case, I expect to be writing some more about Legendary Encounters in the coming weeks.

We are pretty excited about DC Dice Masters next month. We have been enjoying Marvel a lot, and are hoping that the DC set will bring a few more people we know into the fold in terms of playing. DC have such a fun TV universe now that this set could open doors for the game. Not that it needs it, being the phenomenal sell-out that it has been so far. But the more the better, and we’re looking forward to having a local group of players, both for playing, and trading. Being able to swap and trade always makes a collectible game that much easier on the wallet.

The ability to assemble teams from Arrow and The Flash will be enough of a hook to lure more players in. For me personally, though, it is Gotham characters that ensure I have to collect this set. The Gotham characters, not specifically the TV show. It’s just not feasible that I would pass up the opportunity to play with the various and growing assortment of Bat-characters and villains. Where comics are concerned, Batman has always been a favourite, and the world he inhabits is one of the most interesting in comics. It’s just that much darker, broken, and interesting than most, and the interplay between the characters – the history, the psychology of it – is core to what drew me into comic so many years ago, and has stayed with me all this time.