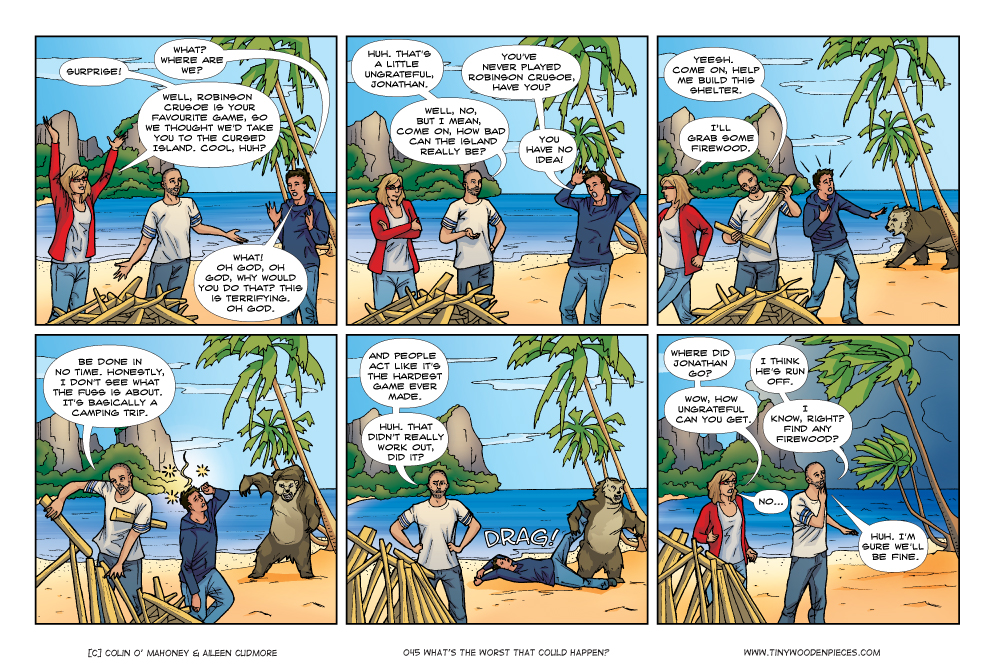 What’s the worst that could happen?

Last year on Board Game Geek, in aid of the Jack Vasel Memorial Fund, we auctioned off an appearance in one of our comics, and Jonathan was the highest bidder, raising far more for the fund than we thought, which was just fantastic.

So, if anyone is wondering what $209 will get you in today’s economy, the answer is ‘eaten by a bear’. So thanks again to Jonathan, and you all should check out his podcast. Although it doesn’t feature any bears, it is about board games. And if you’re here you probably like board games. Unless you are here because your Google image search for bears has gone very wrong. In which case I can only but apologise.

It’s true we haven’t ever played Robinson Crusoe. We both love co-op games, and are big fans of islands (who doesn’t love an island!), so this should be right up our alley. But after a long time researching reviews (good and bad) we’re not yet sure the game is for us. The high difficulty it offers is definitely a positive. Co-op games are best when they challenge the players, and force them to work together. It’s no fun if the players can win without discussion, use of player abilities and teamwork. A game that lacks these elements takes the “co” out of “co-op”. And that’s a silly sentence so let’s move on to the next paragraph.

Reviews of Robinson Crusoe seem quite divisive. That in and of itself is no bad thing, a game that provokes strong reactions is a good thing. If people feel really strongly about something, it’s immediately more interesting, but I think what is required is that we play the game ourselves to see where we stand with it.

In the meantime, it would be remiss not to mention Exploding Kittens. As I write, the final hours of this phenomenal Kickstarter campaign are counting down. I have it open in another tab, watching in real time as more than 30 people a minute decide to buy a card game. I have no idea how many of these people are already gamers, and for how many people this will be a gateway to a new world. A gateway that opens up into this hobby that you and I already love so much, and want to share (I’m presuming that if you’re still here it really is for board games, not bears). A good guess says that a large percentage of the backers are not regular gamers, coming through Matthew Inman’s amazing webcomic, or just the novelty of an exploding kitten, and that is fantastic. The wider the gateway to our hobby is, the better.

And eight and half million dollars says that gate has never been open wider.