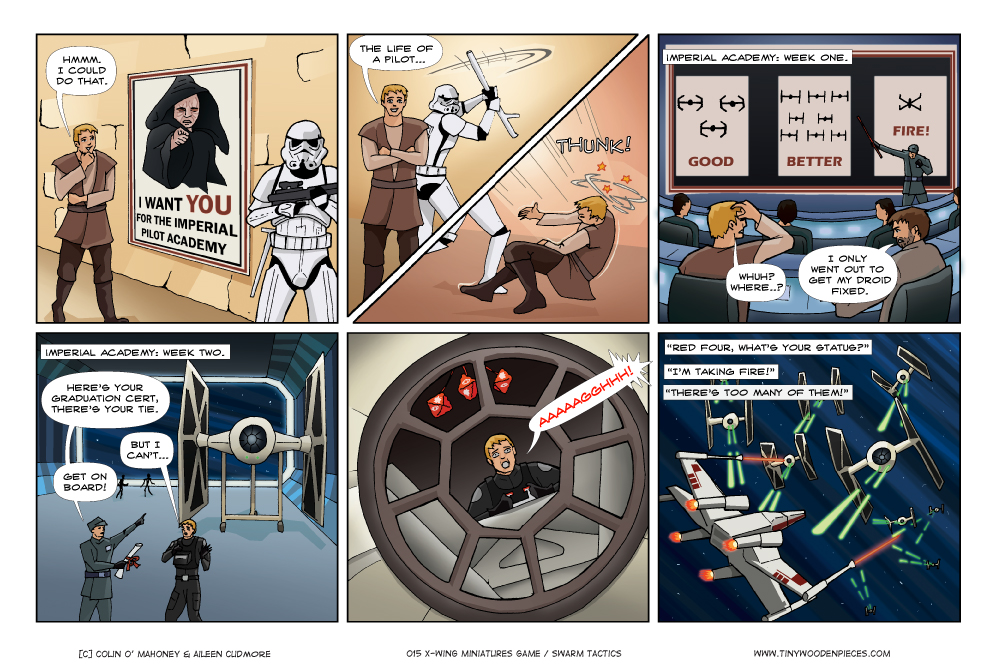 This week’s comic is about the X-Wing Miniatures game. In particular it refers to the Swarm army list for the game. More on that below, as I’d love to talk a little about the game itself first…

I do my best to avoid miniatures games. Games Workshop was my introduction to gaming, and growing up I loved the science fiction universe, the character of the armies, and the real challenge the game brought to the table. What I didn’t love was the expense (or the painting, if I’m honest). Spending more than €50 on a base game and then needing to spend 3-4 times that to then field a reasonable army was then, and still is, too much for me.

When the X-Wing miniatures game was released that part of my brain that loves Star Wars managed to convince the more practical side of my brain that it wasn’t really a miniatures game, so bought it. (That Star Wars part of my brain has more influence that I’d care to admit, and clearly has access to some form of Jedi mind control.) I only played it a couple of times, and not wanting to spend any more on it, put it away in favour of other games in my collection. Over time I caved and bought a couple of more ships (Jedi mind trick for sure) and in the last few weeks have had enough to play battles of about 60 points or so (four ships a side). Those battles have been amazing.

It’s a skirmish level game, meaning you will be commanding no more than 8 ships, not entire fleets. Of course, if the efforts of the Rebel Alliance have taught us anything, it’s that you can do a lot with a small number of ships. Games are fairly quick. Depending on the size of the skirmish and the experience of the players involved, you will likely be done in under two hours or less.

It is tense, and almost always close fought. Ships need to be close in order to engage, and you’re not going to do that without taking damage. It is a dogfight game, and your movement is restricted to what your ship could do. Which means locking in a course, and praying your opponent is in your sights when your manoeuvre is done. While playing you are in a constant white-knuckle rollercoaster of high velocity manoeuvres, outguessing your opponent, and figuring out how much damage you will be risking yourself in order to get close enough to deliver that final, fatal missile. It’s fraught with more tension than a Death Star trash compactor, and more exciting than a Mos Eisley Cantina during happy hour.

And here’s my favourite thing. In any game that’s played competitively you will find a whole pool of resources online. Tactics, hints, strategy guides, and army lists. Army lists that are designed to exploit the games system; squeezing the spirit out of a rulebook, leaving nothing but a dry husk programmed for victory points. Playing a game competitively, for me, can often bleed the game of its fun. I appreciate for some people that’s how they love to do it, and that’s fine. Just not for me. But in X-Wing, one of the best army list out there is The Swarm. And it’s simply taking the largest number of the lowest points ship the game will allow – a basic TIE fighter with an academy pilot –and throwing them at your opponent in waves. And what has more character, what is more Star Wars, more fun to play, than a swarm of TIE fighters?

X-Wing is (despite my best efforts to convince myself otherwise) a miniatures game. If you buy it, be aware you will be buying more than just one box. You will have to keep spending, not just go get the most out of it, but really, to enjoy it past the point of a handful of starter games. As miniatures games go, it is great value. But in case you’re unfamiliar with miniatures games, that value is relative. Collecting one faction only (given you know others with their own armies you can play against) you will be spending an absolute minimum of 60 more (Dollar or Euro) and that figure is likely to look more like 100. But if that figure doesn’t turn you off, then X-Wing has more potential for entertainment than a Wookie juggling Jawas.