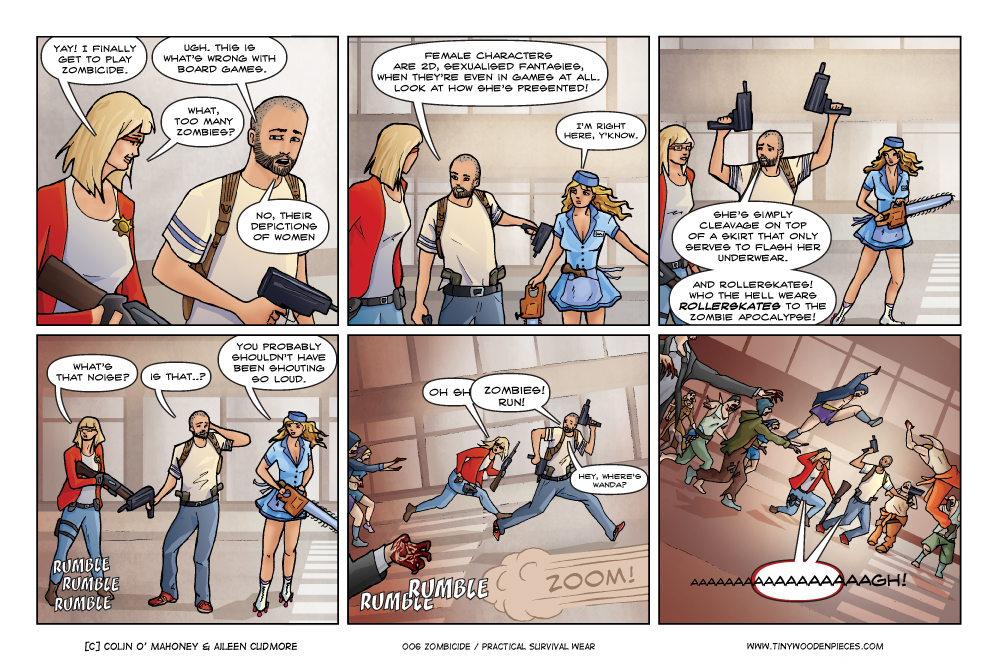 On a more serious note

I hate that guy at the counter of the comic shop who rolls his eyes when someone comes up with a copy of the Walking Dead volume 1. That guy who only thought it was cool when no-one had heard of it, and has no time for newcomers, dilettantes, and people just dipping their toes into the hobby. The guy who is arrogant, condescending to new customers, and generally just ignorant. I have nothing but contempt for the shop owner who allows his staff to chase away new business; to actively discourage people from taking up the hobby. I love comics as much as I do board games, and I want everyone to play games and read comics. I want to share my hobbies, to open their worlds up to everyone who is interested.

I am tired of the boardgamer who says ‘you’ll pick it up as you go along’ when playing something complicated, ensuring a newcomer will flounder helplessly through the first half of a game, and then try fruitlessly to catch up for the second half and never want to play again. Playing to win is fine, but it is not the whole of the experience, indeed for me, it’s not even most of it. Games are as much about storytelling as comics are, and for me, games are to be enjoyed, and enjoyed with friends.

I have no time for anyone or anything that works to keep games and comics as niche hobbies that conform to their respective stereotypes; stereotypes both hobbies should have joyfully cast off years ago, welcoming newcomer with open arms, and not condescending stares.

The entrenched sexism of comic book and board game artwork are a part of this exclusionary culture. That RPG manual with all the female heroes busting out of barely fitting armour more fitted to a day at the beach than battle. Female characters depicted in a wholly sexualised light, where their male counterparts (whom obviously far outnumber them) are geared for combat, survival –whatever it is the game is supposed to be about, that is. In that same way that a woman walking into a comic shop for the very first time is not unlikely to be appalled at what is presented on so many mainstream covers, a woman flicking through RPG manuals or looking at some game boxes is just as likely to be instantly turned off what could be a great game. Maybe even turned off what could be a great hobby.

I don’t actually think there is necessarily anything wrong with pin-up art. It has its place in culture. Its place is not, however, on so many comic covers and gaming paraphernalia: out of context, out of place, and there for all the wrong reasons.

Zombicide is not the worst offender here. I just played this most recently, and the issue came up in our group. It could be argued that some of what the game represents is a riff on its source material, old-skool horror and B-movies. Indeed, the game designers have noted the survivor archetype have come from action movies and tropes already embedded in pop culture. While this does mitigate their decisions, in no way does it forgive artwork like this or this. That kind of skewed depiction of player characters does not do the hobby any good. It is awkward, a little weird and adds a strange tone to an otherwise really fun game. As I said, I did enjoy Zombicide, and I would play it again. But I can’t say I like what they’re saying about the hobby, and I certainly don’t think they are helping it.